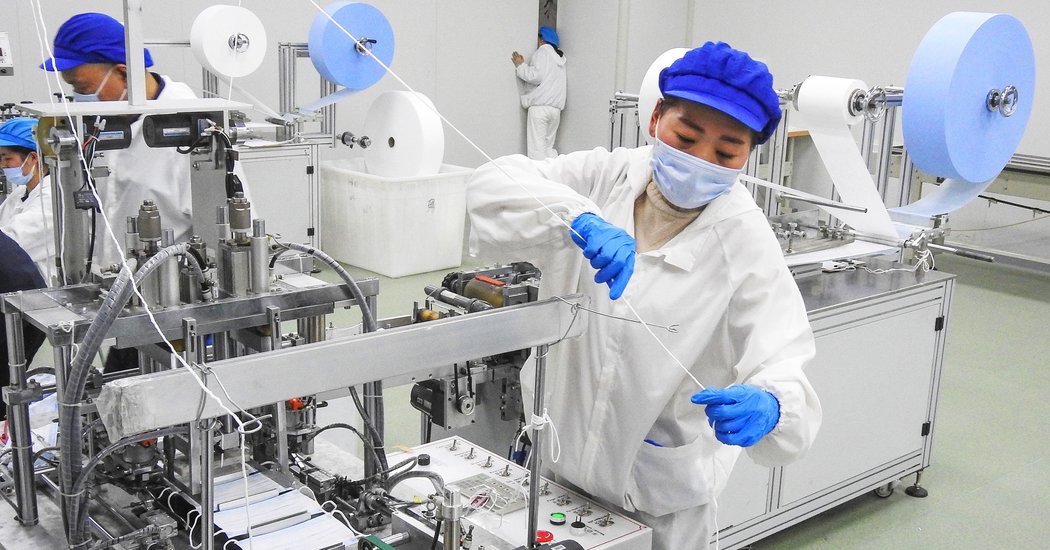 BEIJING — Chinese officials have begun inspecting every shipment of N95 respirators, ventilators and other medical supplies for quality issues before export, a policy likely to delay the arrival of critical gear at hospitals around the world that are struggling to cope with the coronavirus pandemic.

The policy, announced by the General Administration of Customs on Friday, produced immediate delays on Saturday as manufacturers, freight agents and traders tried to understand how to comply. Depending on the city, they said, the delays could range from a few hours to a few days or longer as government officials rush to comply.

The new customs policy comes after a series of complaints from Europe that medical supplies from China had quality problems. Chinese officials have countered that many of these complaints involved industrial respirators that were purchased for medical use but were not designed to meet those standards.

The new delays come as countries have complained that a global free-for-all for personal protection equipment has left acute shortages for doctors and nurses. These countries include the United States, Spain and, most recently, Russia.

China is the world’s dominant producer of a wide range of medical supplies. Its manufacturing lead has widened in many sectors as it has engaged in a nationwide mobilization of medical supplies production since late January, when Beijing ordered a lockdown in the city of Wuhan to curb the rapid spread of the coronavirus there.

China’s daily production of masks and respirators soared from 10 million at the start of February to 116 million just four weeks later.

The Chinese customs agency said on Friday that it would assess the quality of medical supplies before export, adding to the checks that exporters already face. The agency had been checking whether medical supplies were accurately counted, whether the goods infringed on foreign patents and whether the documents accompanying shipments were fraudulent.

The agency gave no indication how long the quality testing might take.

Many factories already have their own quality inspectors. The government’s new rules require an additional check by customs inspectors or other government inspectors acting on their behalf.

Wen Guicheng, the vice general manager of the Hubei V-Medical Products Company, a manufacturer of caps, masks and gloves based in the southwestern suburbs of Wuhan in central China, said that his company was trying to avoid delays by speaking with customs officials before exporting more goods.

Noah Blake, a respirator trader in Shanghai, said that one of his shipments had already been delayed by the new rule, but added that the new regulation would help make sure that public health agencies and consumers could count on medical supplies imported from China.

The new rules might also help some factories export what they make.

Beijing’s initial response two weeks ago to quality complaints was to require that factories producing medical supplies be certified by the government before they could export their goods. That policy caused export delays at many factories that previously manufactured everything from winches to cranes but suddenly switched to making medical equipment after the lockdown of Wuhan on Jan. 23.

Those factories typically do not have medical certification from Beijing, which can take months to obtain.

If these factories are now allowed to export medical supplies that pass quality inspections, then that could allow many more companies in China to export products needed to fight the pandemic.

The customs agency announcement on Friday did not specify whether the new mandate was in addition to the requirement for factory certification or instead of it.

As China appears to have brought the virus mostly under control within its borders, it has ramped up exports of safety gear for medical workers fighting the outbreak. China imported two billion masks and 400 million other items of personal protection equipment for its own health care workers during the dangerous and arduous task of containing the virus, particularly in Wuhan.

China has mounted a humanitarian aid blitz to allay international criticism that it was slow to alert the world to the dangers of the pandemic. China has donated or sold medical gear to more than 100 countries, including Italy, Nigeria and the United States.

In the United States, the debate over the quality of Chinese medical supplies has centered on respirators that are manufactured to meet China’s KN95 technical standard, which is slightly different from the N95 standard commonly used in North America. The Food and Drug Administration announced on April 3 that it had approved the emergency use of KN95 respirators in medical settings in the United States.