Grateful for Aid, but Worried About What Comes Next 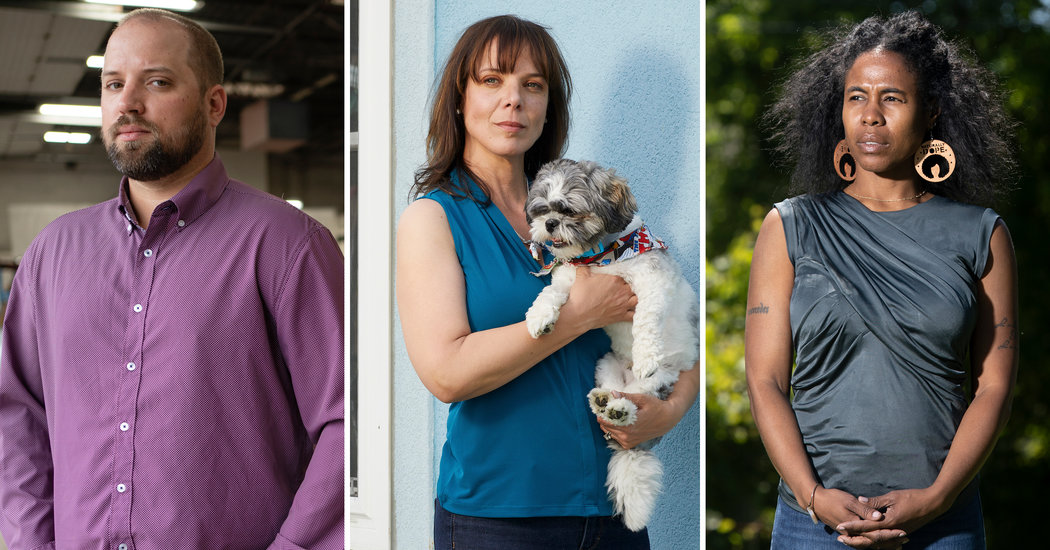 The Paycheck Protection Program, the federal government’s ambitious effort to keep workers at small businesses off the unemployment rolls through the worst of the pandemic, has provided a financial safety net to more than four million companies.

For many, the money was a lifeline. It let a trucking company keep paying drivers who would otherwise have been laid off and gave a group of therapists time to adjust to telemedicine and connect with new clients.

But the pandemic’s devastation continues. Many cities are still shut, consumers’ habits have changed and recharging the economy may take years. Small companies, which employ nearly half of America’s workers who don’t work in government, typically have thin margins and scant savings. Some fear they won’t survive without further help.

Even for those who got help, the program’s rollout was messy and chaotic, and Congress is arguing over proposed changes. The program offered small companies a loan that would be converted to a grant if they used most of the money for eight weeks of payroll. The earliest loan recipients are near the end of their eight-week relief period.

Here’s how six businesses that got loans from the paycheck program’s $660 billion fund are faring.

+ Received a loan on April 3 (declined to disclose the size)

Tanya Weinreis, the owner of Mountain Mudd, remembers the moment her business changed: 9:01 p.m. on Friday, March 13, as she wrapped up a 14-hour shift at her coffee kiosk at the MetraPark events center. Mrs. Weinreis had just taken delivery of 60 gallons of milk for the next day’s final round of a statewide high school basketball tournament.

“The announcer got on the speaker and said, ‘Don’t come back’ — the tournament was canceled,” Mrs. Weinreis recalled. “We lost thousands of dollars from just that one day.”

Mrs. Weinreis had around 50 employees at Mountain Mudd’s 11 kiosks and pop-up event locations. The MetraPark location was one of her busiest, and missing its summer season — with events like rodeos, graduation ceremonies and the annual MontanaFair — will leave a crater in her company’s sales.

But Mrs. Weinreis’s business is generally well suited for a socially distanced world: The kiosks can operate with just a few workers, and customers drive through. She has been able to keep nearly all of her other stands running.

Mrs. Weinreis received her federal loan check just a few hours into the program’s first day, thanks to a team at Yellowstone Bank. Her employees’ head count and hours have stayed fairly constant, Mrs. Weinreis said, and she expects to have her loan fully forgiven. She hired several new workers in May and is cautiously optimistic heading into the summer.

“April was the worst month we’ve ever had. But May, so far, has been better,” she said. “Based on that, I’d like to think we’ll be in good shape to continue operating without needing any more funding. I’m very hopeful. This was a great program, and I feel very thankful for it.”

+ Received a five-figure loan on April 6

Utah is one of the few places that never had a statewide stay-at-home order, but Jennifer McMurrough’s customers vanished as the pandemic spread. March 14 was the first weekend in her company’s 22-year history that she had no overnight boarders.

“It went to zero, and it stayed there a long time,” she said. “The whole business is down at least 90 percent. No one is going to work, and half my business relies on the travel season.”

Ms. McMurrough had nine full-time employees (one quit because of the pandemic) and some part-time help. The paycheck loan helped her keep paying her workers, who are still caring for Little Dogs Resort’s handful of canine clients, but she’s frustrated by the program’s shifting rules and complicated terms. She was wary when she signed the paperwork — “I’ve never signed loan documents before where I didn’t know all the rules,” she said — and she is concerned about whether her post-pandemic payroll will line up with her precrisis head count, wages and hours. If it doesn’t, a portion of her loan may have to be repaid under the program’s rules.

“I’m treating this as a debt that I have to start paying back in November,” she said, referring to the end of the loan’s six-month grace period. “I’ll be pleasantly surprised if I don’t have to, but I’m not counting on it. And if I do have to pay it back, I’m in an even more precarious position than I was when I started.”

Ms. McMurrough is determined to adapt and survive, but she’s concerned about how the pandemic has reshaped her market. She expects to lose what is usually a booming summer season. Her staff has stayed busy making repairs and catching up on paperwork, but none of that work makes money. She recently applied at her bank, Celtic Bank, for a working-capital loan.

“I have no doubt my business is viable and we will thrive again, but we’ve lost months of sales,” she said. “My next payroll is the last one in my covered period, so whatever I’m going to do next, I have one pay period left to figure it out.”

Just one week after A&J Transportation got its paycheck loan, its entire staff of truckers was out of work because producers shut down their wells as oil prices plunged in April.

“We lived through the 2014 oil crash, the 2008 economic crash. This one is worse,” said Dana Sanford, the office manager for the family-run business, which worked exclusively on oil fields. “We’ve never had zero oil work for this amount of time, ever.”

The loan arrived right as the work disappeared, so A&J used it to keep paying all its 72 employees, even though most had nothing to do but stay home. The money kept those workers off the unemployment rolls, Ms. Sanford said.

To get some cash, A&J started bidding for over-the-road contracts. It landed jobs hauling toilet paper, medical supplies and other goods, but the work required refitting its fleet of trucks for different road conditions. For the drivers, too, long-haul trucking is very different from what they did before, hauling sand used for hydraulic fracturing.

“It was expensive and time-consuming, but we had to do something to adjust,” Ms. Sanford said.

She does not expect a quick recovery. A&J hopes to return one of its crews — about a third of its workers — to the oil fields in June, but Ms. Sanford thinks it will be months before the company’s full fleet is needed. Its eight weeks of payroll support will run out in mid-June.

“The drivers are getting a little more scared as that last week approaches, wondering, ‘Am I going to have a job when this is done?’” she said. “I wish we could apply again. Even four more weeks would be really helpful. The P.P.P. has been a wonderful program, and we’re really glad the Trump administration did it. But what comes next is still pretty uncertain for us.”

When Minnesota closed its schools on March 18, business plunged at Arubah Emotional Health Services, which works extensively with children and families.

“We lost about 40 percent of our clientele,” said Anissa Keyes, the group’s founder and president. “But then, the pandemic caused a different, larger population to need support.”

Because medical reimbursements typically have at least a month’s delay, Arubah’s cash-flow nadir came in mid-April. “There was 37 cents in my business account,” Ms. Keyes recalled. “It was right after payroll. The next day, the loan deposited, and I could breathe again.”

Arubah’s therapists had never done telehealth appointments, but virtual visits were soon the only option. As they adjusted, Arubah’s calendar began filling up again. Bookings are back to about 80 percent of what they were; Ms. Keyes thinks they’ll reach — and probably surpass — full capacity by July.

The loan “was perfectly timed and gave us the perfect boost to sustain us,” she said.

She began working on her loan-forgiveness calculations this past week and is unsure if her debt will be fully erased. Some of her 15 employees had their hours reduced during the slow weeks. The paperwork is “a headache,” she said, and is full of imprecise and confusing language.

“Even if I have to pay some of it back, I’m grateful,” she said. “Our numbers are going back up. For the mental-health industry, this crisis has caused a really big boom — which is unfortunate.”

+ Received a six-figure loan on April 14

On Monday, March 16 — the day Maryland’s schools closed — Brandon Hutson, the president of Ed & Jim’s Body Shop, arrived at work at 7:30 a.m. to a ringing phone.

Two weeks later, Mr. Hutson and his uncle William Hutson, the shop’s owners, furloughed their 14 employees. When Brandon Hutson learned about the Paycheck Protection Program, he applied immediately, and started recalling his workers the day the money came through. But sales since then have been spotty.

“We have work coming in, but it’s not nearly what it was,” he said. “We had one really good week, then it tapered off, then a decent week, then a slow one.”

Right now, thanks to the loan, the workers are being paid roughly what they made before, but the end date for that subsidy is nearing. And other deferred bills — health insurance, vendor payments, the business’s bank loan — will also be coming due. Mr. Hutson would like to see another round of small-business aid.

“Eight weeks was a good chunk of time,” he said. “We were optimistic. We thought that it would be rough, but that would be enough time to get through this curve. But we’re not through. What about the next eight weeks? That’s a concern everyone has right now.”

“I was on Cloud 9 the day our loan came through,” said Lindsey Munson, the administrator of the Montessori School of Charlottesville, Va. “It really made such a difference for us.”

Ms. Munson’s school has children from age 21 months through kindergarten — too young for much screen time and distance learning. After Virginia announced on March 13 that it was closing its schools, the Montessori School furloughed its 13 assistants and tried to figure out how long it could keep paying its six teachers, who have been running online sessions.

Ms. Munson offered parents a rebate for the final two months of the year. They had three choices: a cash refund, a credit toward next year’s tuition or a tax-deductible donation to the nonprofit school. About half chose to donate the money.

“That’s the only thing allowing us to not start off next year at a loss,” she said. “We do a lot of scholarships and basically break even. We can’t just borrow our way out of this, because we have no way to pay it back.”

The Paycheck Protection Program helped the school stay solvent through the end of the year, but Ms. Munson is wary of what comes next. It’s “anyone’s guess” what will happen to the school’s small summer camp, which normally starts in late June, and Virginia’s government is still hashing out a plan for the fall.

“If things stay closed, everyone who has benefited from this program really needs it to happen again,” she said. “We need to be keeping people on payrolls so they can pay their bills, and we need our small businesses and nonprofits to stay intact so that there’s jobs for people to come back to.”