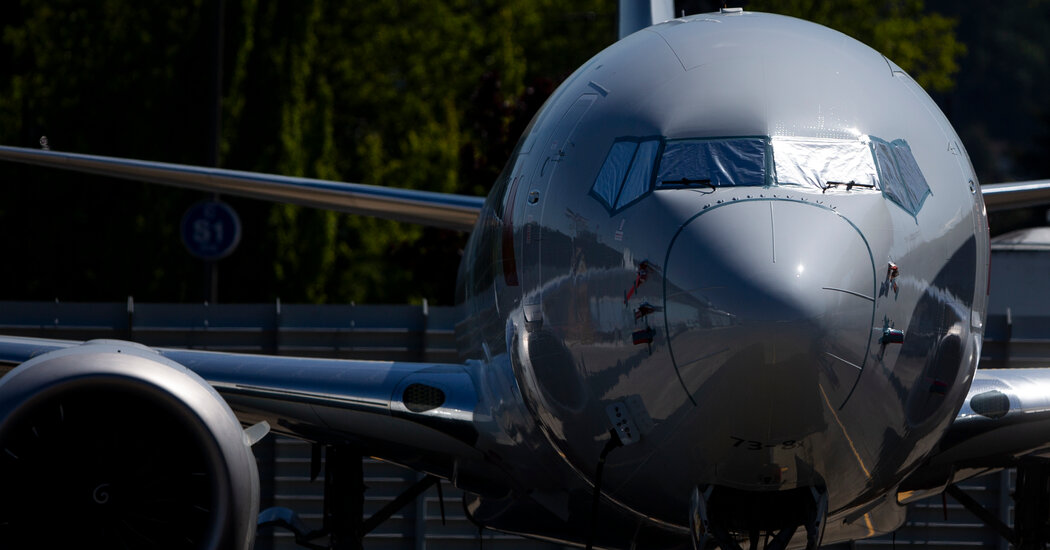 The two fatal crashes that killed 346 people aboard Boeing’s 737 Max and led to the worldwide grounding of the plane were the “horrific culmination” of engineering flaws, mismanagement and a severe lack of federal oversight, the Democratic majority on the House Transportation and Infrastructure Committee said in a report on Wednesday.

The report, which condemns both Boeing and the Federal Aviation Administration for safety failures, concludes an 18-month investigation based on interviews with two dozen Boeing and agency employees and an estimated 600,000 pages of records. Over more than 200 pages, the Democrats argue that Boeing emphasized profits over safety and that the agency granted the company too much sway over its own oversight.

“This is a tragedy that never should have happened,” Representative Peter A. DeFazio of Oregon, the committee chairman, said. “It could have been prevented, and we’re going to take steps in our legislation to see that it never happens again.”

Representative Sam Graves of Missouri, the committee’s top Republican, said that while change was needed, congressional action should be based on nonpartisan recommendations, “not a partisan investigative report.”

The report was issued as the F.A.A. appeared close to lifting its grounding order for the Max after test flights this summer. F.A.A. clearance could lead aviation authorities elsewhere to follow suit and allow the plane to fly again as soon as this winter.

The congressional report identified five broad problems with the plane’s design, construction and certification. First, the race to compete with the new Airbus A320neo led Boeing to make production goals and cost-cutting a higher priority than safety, the Democrats argued. Second, the company made deadly assumptions about software known as MCAS, which was blamed for sending the planes into nosedives. Third, Boeing withheld critical information from the F.A.A. Fourth, the agency’s practice of delegating oversight authority to Boeing employees left it in the dark. And finally, the Democrats accused F.A.A. management of siding with Boeing and dismissing its own experts.

“These issues must be addressed by both Boeing and the F.A.A. in order to correct poor certification practices that have emerged, reassess key assumptions that affect safety and enhance transparency to enable more effective oversight,” the committee said.

Those crashes were caused in part by the MCAS system aboard the Max. Because the engines on the Max are larger and placed higher than on its predecessor, they could cause the jet’s nose to push upward in some circumstances. MCAS was designed to push the nose back down. In both crashes, the software was activated by faulty sensors, sending the planes toward the ground as the pilots struggled to pull them back up.

The deaths could have been avoided, however, if not for a series of safety lapses at Boeing and the F.A.A., the Democrats argued.

Internal communications show that Boeing dismissed or failed to adequately address concerns raised by employees relating to MCAS and its reliance on a single external sensor, the committee found. It also accused Boeing of intentionally misleading F.A.A. representatives, echoing a July report from the Transportation Department’s inspector general.

That report found that Boeing had failed to share critical information with regulators about important changes to MCAS; had been slow to share a formal safety risk assessment with the agency; and had chosen to portray the software as a modification to an existing system rather than a new one, in part to ease the certification process.

The Democrats on the committee also accused Boeing of putting a priority on profits by strongly opposing a requirement that pilots receive simulator training to fly the plane. Under a 2011 contract with Southwest Airlines, for example, Boeing promised to discount each of the 200 planes in the airline’s order by $1 million if the F.A.A. ended up requiring simulator training for pilots moving from an earlier version of the aircraft, the 737NG, to the Max.

“That drove a whole lot of really bad decisions internally in Boeing, and the F.A.A. did not pick up on these things,” Mr. DeFazio said.

In a statement, Boeing said it had learned lessons from the crashes and had started to act on the recommendations of experts and government authorities.

“Boeing cooperated fully and extensively with the committee’s inquiry since it began in early 2019,” the company said in a statement. “We have been hard at work strengthening our safety culture and rebuilding trust with our customers, regulators and the flying public.”

The revised Max design has received extensive review, Boeing said, arguing that once the plane is ready to fly again, “it will be one of the most thoroughly scrutinized aircraft in history.”

The F.A.A. said in a statement that it would work with the committee to carry out any recommended changes and was already making some of its own.

“These initiatives are focused on advancing overall aviation safety by improving our organization, processes and culture,” it said.

Last month, the agency announced plans to require a number of design changes to the Max before it can fly again, including updating MCAS and rerouting some internal wiring. The proposed requirement is open for public comment until next week.

Despite the damage to Boeing’s reputation, the Max has customers that cannot break contracts with the company, are attracted by the promise of longer-term fuel savings or otherwise still want the plane in their fleet. Still, Boeing warned in January that the Max grounding would cost more than $18 billion. The severe downturn in travel because of the pandemic only made matters worse, contributing to the company’s decision to cut more than 10 percent of its work force.