‘I Can’t Keep Doing This:’ Small Business Owners Are Giving Up 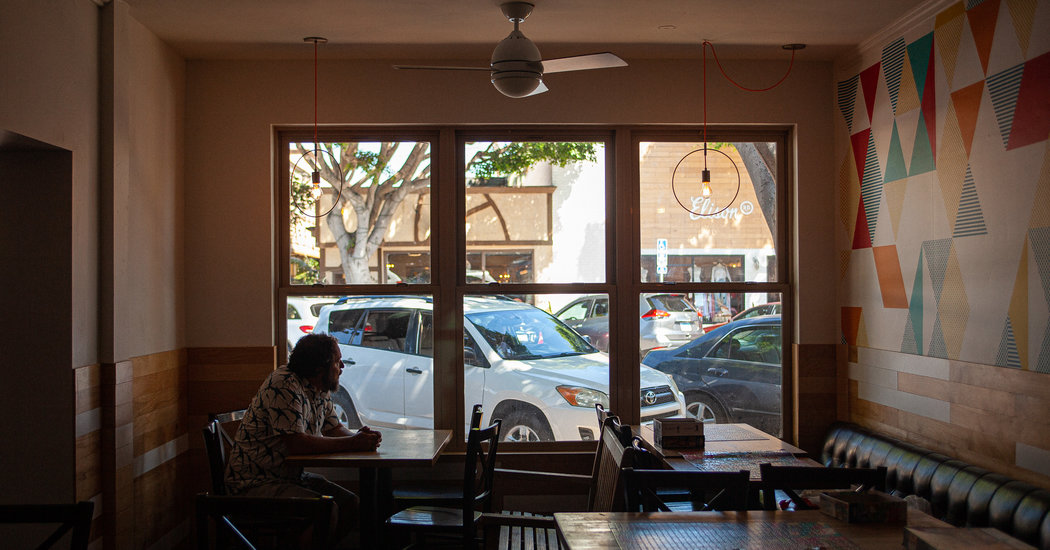 On the last Friday of June, after Gov. Greg Abbott of Texas said that bars across the state would have to shut down a second time because coronavirus cases were skyrocketing, Mick Larkin decided he had had enough.

No matter that Mr. Larkin, an owner of a karaoke club in Wichita Falls, Texas, had just paid $1,000 for perishable goods and protective equipment in anticipation of the weekend rush. No matter that the frozen margarita machine was full, that 175 plastic syringes with booze-infused Jell-O were in place, or that there were masks for staff members and hand sanitizer for guests.

That day, June 26, Mr. Larkin and his partner dumped what they had just bought into the trash and decided to close their club, Krank It Karaoke, for good.

“We did everything we were supposed to do,” Mr. Larkin said. “When he shut us down again, and after I put out all that money to meet their rules, I just said, ‘I can’t keep doing this.’”

It was harrowing enough for small businesses — the bars, dental care practices, small law firms, day care centers and other storefronts that dot the streets and corners of every American town and city — to have to shut down after state officials imposed lockdowns in March to contain the pandemic.

But the resurgence of the virus, especially in states such as Texas, Florida and California that had begun to reopen, has introduced a far darker reality for many small businesses: Their temporary closures might become permanent.

Nearly 66,000 businesses have folded since March 1, according to data from Yelp, which provides a platform for local businesses to advertise their services and has been tracking announcements of closings posted on its site. From June 15 to June 29, the most recent period for which data is available, businesses were closing permanently at a higher rate than in the previous three months, Yelp found. During the same period, permanent closures increased by 3 percent overall, accounting for roughly 14 percent of total closures since March.

Researchers at Harvard believe the rates of business closures are likely to be even higher. They estimated that nearly 110,000 small businesses across the country had decided to shut down permanently between early March and early May, based on data collected in weekly surveys by Alignable, a social media network for small business owners.

Christopher Stanton, an associate professor at Harvard Business School who was one of the researchers, said it was difficult to accurately gauge how many small businesses were closing because, once they shut their doors for good, the owners were hard to reach. He added that it could take up to a year before government officials knew the true toll the pandemic was taking on small businesses.

At the moment, 39 states continue to record growing numbers of new cases daily.

It is not clear how many of the businesses Yelp is tracking count as “small” — defined by the Small Business Administration as those with 500 or fewer employees. But the company found that, among the tracked businesses — which include restaurants, retailers and other independent, consumer-facing operations — retail businesses, led by beauty supply stores, have been closing at the highest rate since the pandemic began. Restaurants are the next hardest-hit group.

Small businesses account for 44 percent of all U.S. economic activity, according to the S.B.A., and closures on such an immense scale could devastate the country’s economic growth. If they were grouped together, small businesses would be among the country’s biggest employers, said Satyam Khanna, a resident fellow at the Institute for Corporate Governance and Finance at New York University School of Law who has written about the effects of the pandemic on small businesses.

So when small businesses close en masse, an entire sector of the economy suffers, Mr. Khanna said. There is lower cash flow, higher debt and more unemployment. “That leads to a big drag on the eventual recovery,” he said. “Because they are such an important source of jobs, losing them the way we are losing them now is going to make things far worse than they otherwise need to be.”

Because small businesses depend heavily on foot traffic and operate on thin margins, they are especially vulnerable to the ripple effects of a widespread shutdown.

For nearly two decades, Rich Tokheim and his wife sold sports memorabilia — hats, T-shirts, coffee mugs and other trinkets — to fans in Omaha at their store, The Dugout. Since 2011, The Dugout has occupied prime real estate across the street from the city’s 24,000-seat baseball stadium, which usually hosts the College World Series each spring.

The 2020 World Series was canceled in March. In the weeks that came after, other sporting events were scrapped — starting with college sports and extending to professional leagues that have struggled to relaunch their activities.

Mr. Tokheim, 58, watched his business fall off with growing unease, but it was only after a friendly chat with a retired college athletic director in May that the gravity of his situation hit home. He was already worried about the state of the virus in Nebraska, and whether there was enough tracking. Then the athletic director predicted that if college football was canceled for the year, it would be the end of Division I sports as a whole.

“That really put me in overdrive,” Mr. Tokheim said. He negotiated an early exit on his store lease and announced a clearance sale at the store. The Dugout closed for good on June 30.

The government’s Paycheck Protection Program, rolled out in April and administered by the S.B.A., earmarked $660 billion of aid for small businesses, but stipulated that a loan would be forgiven only if most of it was used to pay employee wages for eight weeks. The rules were later relaxed, but in a sign of how many small business owners did not feel confident that they would be on steady ground by the time repayment was due, roughly $130 billion of aid money remained untapped when the program ended in June.

Even for those who took a P.P.P. loan, survival is no guarantee. Nick Muscari, a 38-year-old restaurateur in Lubbock, Texas, received one. His restaurant, Nick’s Sports Grill and Lounge, had been the culmination of Mr. Muscari’s life’s work — his years of toil as a waiter, pizza cook and manager at restaurants and bars beginning in his teenage years. Three years ago, he bought out the two partners who helped him start the restaurant in 2010. He considered it a crowning achievement, but to do so, he had to borrow money. He still owes a bank $80,000.

Mr. Muscari tried to ride out the spring lockdown that temporarily shuttered his restaurant with the help of the P.P.P. money. But when the state’s second closure order took effect on June 26, he decided to close for good.

“It had been in the back of our minds, just like, you know, if this happens again, can we make it?” Mr. Muscari said. “We were following all the rules and people were spread out. We never had anybody catch the virus in our establishment.”

Mr. Muscari, with the business closed and its 30 employees jobless, has nothing left but his house and his car. He also expects his landlord to try to sue him for the eight years’ worth of rent he is contracted to pay on his defunct restaurant’s space.

Many small businesses are also finding it onerous keep up with constantly changing local guidelines, while others are deciding that no matter what their local officials say, it just is not safe to keep going. Gabriel Gordon, the owner of a tiny but popular barbecue restaurant in Seal Beach, Calif., decided to close permanently after studying the restaurant’s layout. He had determined that the kitchen would never be safe for multiple staff members to occupy at once while the virus was still active in the area.

“It’s essentially two hallways that are 11 feet wide,” Mr. Gordon said, describing the shape of the restaurant, Beachwood BBQ. “There are food trucks that are larger than my kitchen.”

Whatever the specific reasons may be for each closure, Justin Norman, Yelp’s vice president of data science, said that the federal government should offer small businesses more help. Mr. Norman said Yelp was concerned about the effects of small business closures, especially those owned by people of color, on society. Yelp, however, also has a financial interest in maintaining a robust small business environment, because it relies heavily on advertising by businesses on its platform.