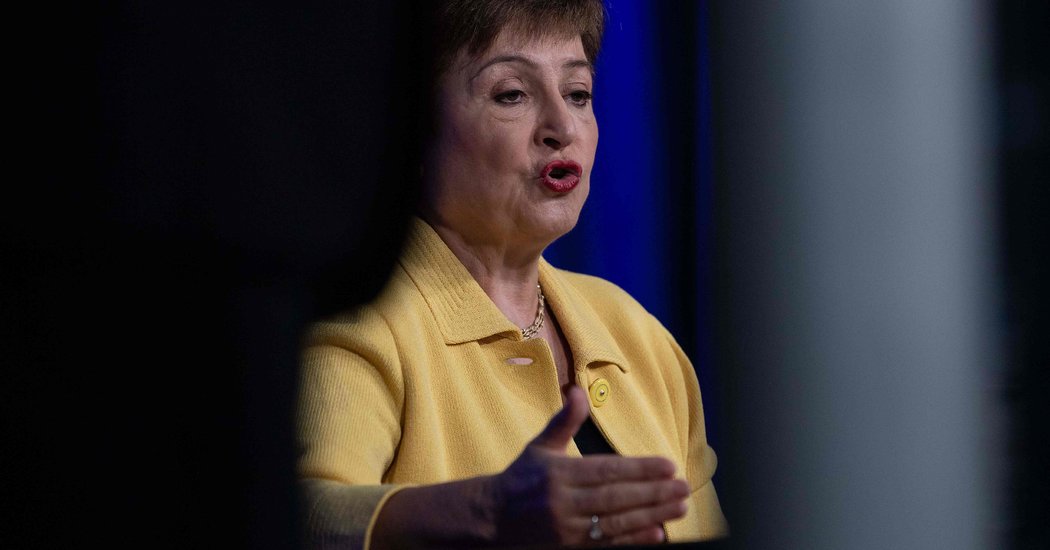 WASHINGTON — The International Monetary Fund issued a stark warning on Tuesday about the coronavirus’s economic toll, saying that the world is facing its worst downturn since the Great Depression as shuttered factories, quarantines and national lockdowns cause economic output to collapse.

The grim forecast underscored the magnitude of the shock that the pandemic has inflicted on both advanced and developing economies and the daunting task that policymakers face in containing the fallout. With countries already hoarding medical supplies and international travel curtailed, the I.M.F warned that the crisis threatened to reverse decades of gains from globalization.

In its World Economic Outlook, the I.M.F. projected that the global economy would contract by 3 percent in 2020, an extraordinary reversal from early this year, when the fund forecast that the world economy would outpace 2019 and grow by 3.3 percent. This year’s fall in output would be far more severe than the last recession, when the world economy contracted by less than 1 percent between 2008 and 2009.

“As countries implement necessary quarantines and social distancing practices to contain the pandemic, the world has been put in a Great Lockdown,” said Gita Gopinath, the I.M.F.’s chief economist. “The magnitude and speed of collapse in activity that has followed is unlike anything experienced in our lifetimes.”

The figures were released as the Group of 7 finance ministers and central bankers, who were supposed to meet in Philadelphia this week, held a virtual discussion on Tuesday to assess the global economic crisis.

In a joint statement after the meeting, they pledged to coordinate their efforts to restore growth, protect jobs and reinforce the global financial system. They noted that the I.M.F. was prepared to deploy its $1 trillion lending capacity to help vulnerable economies cope with recessions and they endorsed a proposal to let poor countries suspend debt service payments. The broader Group of 20, which is also expected to convene virtually this week, must still sign off on the debt relief plan.

“The scale of this health crisis is generating unprecedented challenges for the global economy,” the G7 officials said.

The United States is expected to take a severe hit, with the I.M.F. projecting that the American economy will contract by about 6 percent in 2020.

The global group was skeptical about the prospect for a “V” shaped recovery in the United States, suggesting that a sharp rise in unemployment and disruptions to supply chains will keep the economy below its pre-virus trend next year.

The impact is already evident in trade data, where slowing economic activity has caused global commerce to plummet. Tracking by S&P Global Panjiva published Tuesday showed global shipments of goods into the United States fell by 10.1 percent in March, the fewest number of monthly shipments since 2016. Consumer goods have been hit particularly hard, with shipments of furniture, apparel, steel and electronics falling by more than 15 percent last month compared with one year ago.

Ms. Gopinath said that the loss of global output would be “far worse” than the 2008 financial crisis and that policymakers were facing an unusual predicament in that traditional stimulus measures are little match for a pandemic that is being fought with shutdowns and quarantines.

“It is very likely that this year the global economy will experience its worst recession since the Great Depression,” she said.

According to the I.M.F., the global economic contraction from 1929 to 1932 was approximately 10 percent. Advanced economies shrank by 16 percent during that period.

Barry Eichengreen, the University of California, Berkeley, economist who is a scholar of the Great Depression, said there were several parallels between now and then. He pointed to the jobless rate in the United States, which he expects could top the 25 percent that was reached in 1933, and the global nature of the downturn, which could prolong the crisis as poor countries struggle to combat the virus.

While the Great Depression started in the financial sector and played out over several years, Mr. Eichengreen notes that the drop in economic activity this year has been sudden and the bottom remains unclear. But some of the spillover effects could be similar, he said, with skittish households increasing their savings and businesses growing wary of large capital investments. And as deficits soar, some countries could push for austerity measures.

Governments around the world are grappling with how and when to reopen parts of their economies in hopes of reviving business activity. President Trump is expected to make an announcement this week that could provide guidance for scaling back stay-at-home orders.

But the economic recovery is expected to be slow until people are confident it’s safe.

“Even if spending starts to bottom in April, we see little chance of a meaningful pickup in activity in the immediate future,” economists at J.P. Morgan wrote in an April 9 research note, noting that reopening could lead to relapse. “We don’t think that the bottom of the current downturn will occur until May at the earliest.”

Bank of America economists said in a research note that “the coronavirus will cause the deepest postwar recession in U.S. history,” predicting a 6 percent hit to growth for the full year.

Neel Kashkari, president of the Federal Reserve Bank of Minneapolis, said a quick rebound was unlikely, particularly if people continued to worry about getting sick.

“We know after the Great Depression people carried the scars of that experience with them for many, many years,” Mr. Kashkari said in an interview on the “Today” show on NBC. “I think the longer that this goes on, the more people who are affected by it, the longer that recovery is going to be.”

That view is not monolithic. Another Fed official suggested on Tuesday that the shutdown was costing $25 billion a day in lost output, and that blanket testing should be made available to get people back to work.

He compared making widespread tests available to providing common goods, like eggs or cups of coffee.

“People say it can’t be done or we don’t have enough resources,” he said. “You really want to ramp that up at all costs and even if somebody gets rich off it or something, you still want to do it.”

Considerable uncertainty remains as the health of the economy will be dictated by the trajectory of the virus. If the pandemic persists into the second half of the year, the global contraction could be twice as severe and the anticipated rebound in 2021 could fail to materialize if additional waves of the virus spread later in the year, according to the I.M.F. Over the next two years, the pandemic could shave $9 trillion from global gross domestic product, or G.D.P.

In 2020, the I.M.F. projects the euro-area economy will shrink by 7.5 percent, led by steep declines in Italy and Spain.

Emerging markets and developing economies will not be spared, but in some cases they fare better. In China, where the virus originated and where draconian measures were imposed to combat it, the economy will expand at a sluggish 1.2 percent this year, down from 6.1 percent last year. India’s economy is expected to grow 1.9 percent, down from 4.2 percent in 2019.

Tentatively, the fund projects global growth to rebound to 5.8 percent next year. Barring the fast discovery of a vaccine or treatment, most countries are not expected to return to their pre-virus growth trends in 2021.

The fund calls for governments to invest in supporting their health care systems and ensuring that workers maintain ties to their jobs during lockdowns so that economic activity can resume when the virus recedes. In a press briefing that was broadcast online, Ms. Gopinath urged countries not to turn to protectionism and retreat behind their borders, warning that following such instincts could slow the recovery.

“It is very important that this does not become a feature where we reverse all the gains we have got from globalization,” she said.