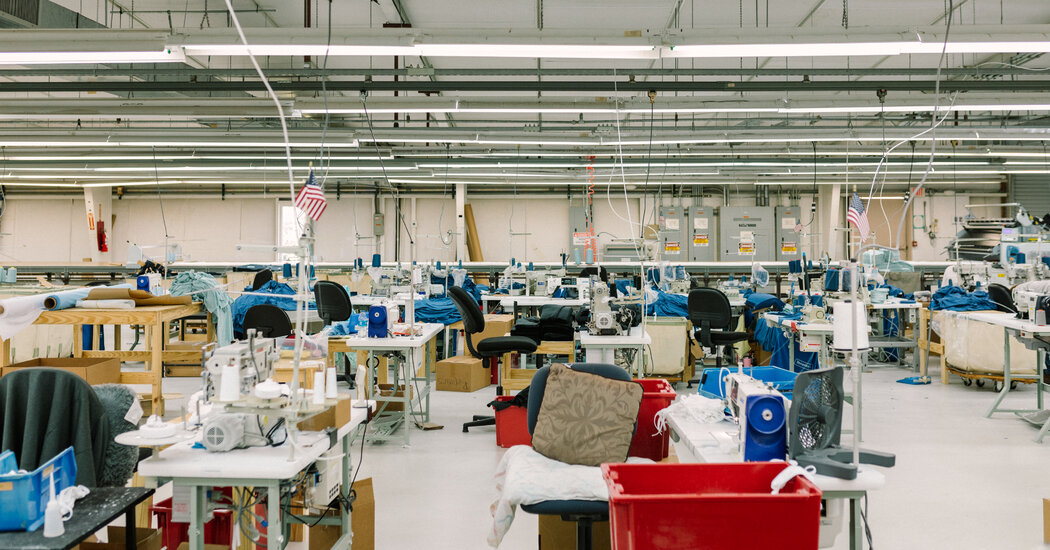 The American economy slowed in July as the pace of hiring eased from the robust rate of the previous two months, a victim of waning momentum and the resurgence of the coronavirus in many parts of the country.

Employers added 1.8 million jobs, well below the 4.8 million jump in payrolls in June, the Labor Department reported, after virus-related restrictions caused some businesses to close for a second time. The unemployment rate fell to 10.2 percent.

Hours after the report underscored the slowing recovery, talks between administration officials and congressional Democrats on how to pump more aid into the economy were on the verge of collapse. On Friday night, President Trump threatened to bypass Congress and act on his own — though his power to do so was unclear.

Even with July’s gains, fewer than half of the 22 million jobs lost in March and April have been restored. And economists warn that the rest of the lost ground will be a challenge to regain.

“The easy hiring that was done in May and June has been exhausted,” said Michelle Meyer, head of U.S. economics at Bank of America. “With many companies not running at full capacity, it becomes harder to get that incremental worker back in.”

Over all, the job market reflects the crosswinds buffeting the economy less than 100 days before the presidential election. Retailers continue to file for bankruptcy, while airlines and hotels operate at a small fraction of capacity. Some companies are calling back laid-off employees, even as other employers continue to shed workers.

The longer the crisis goes on, the greater the toll for businesses, especially smaller ones.

“We’re going to start to see a lot of small businesses fall by the wayside, a lot of people who are unemployed become chronically unemployed,” said Kenneth S. Rogoff, a Harvard University economist who has written extensively on financial and economic crises. “We’re in very, very dangerous territory.”

And underscoring the prevalence of what economists term “churn” in the labor market, some jobless Americans have secured work only to find themselves out of a job for a second time.

After coronavirus-related lockdowns forced dining establishments in New York to close in March, Hannah Lane, 24, was laid off as a server in a popular Gramercy Park restaurant where she made about $60,000 a year.

She applied for unemployment benefits, but had to wait two months for the payments to begin. Then, in early July, as New York allowed restaurants to open for indoor dining, Ms. Lane was recalled to her job.

“I went back into work, clocked in, went back on payroll, the whole nine yards,” she said.

She had spent just one day there when Gov. Andrew M. Cuomo reversed course and prohibited dining inside restaurants. Ms. Lane was laid off again, and found herself back on unemployment and looking for work.

The leisure and hospitality industry was hit hard in the downturn and faces new restrictions on bars and indoor dining in states like California, Florida and Texas.

July’s job growth in the industry followed a jump of 3.4 million in May and June, seasonally adjusted, but employment in the field is still 4.3 million below where it was in February.

The pandemic’s toll on jobs in those categories has hit lower-paid workers especially hard, including millions who depend on tips. For big increases in hiring at restaurants and bars, employees may need to wait until indoor dining is again permitted in states like New York — something unlikely to occur until a vaccine is found.

While the survey of households released on Friday counted 16.3 million Americans as unemployed, the Labor Department has reported that over 30 million are receiving some sort of unemployment benefit.

The household survey does not count people as unemployed if they have given up the search for work and are not considered part of the labor force. There are also differences between the Labor Department’s definition of unemployment and state requirements for benefits.

However it is measured, the pandemic’s economic pain has not been distributed evenly.

The seasonally adjusted unemployment rate for Black adults was 14.6 percent in July, down slightly from 15.4 percent the month before and a little more than two percentage points from its peak in May — but still more than double its 5.8 percent rate in February.

Joblessness for white workers eased to 9.2 percent in July. While that rate is up sharply from 3.1 percent in February, it has fallen about five percentage points from its April peak.

Unemployment among other minority groups also remains elevated. The rate for Hispanic workers was at 12.9 percent, up from 4.4 percent before the crisis. Asian workers — who before the downturn had the lowest jobless rate of any demographic group — posted a 12 percent unemployment rate in July.

Policymakers have noted the differing impact. “The rise in joblessness has been especially severe for lower-wage workers, for women, and for African-Americans and Hispanics,” Jerome H. Powell, the Federal Reserve chair, said at a news conference in late July. “This reversal of economic fortune has upended many lives and created great uncertainty about the future.”

For some workers, securing a position has meant accepting lower pay.

When the pandemic hit, David Espy was a safety manager overseeing the construction of a resort hotel at Walt Disney World in Florida. But in mid-March, when virus-related shutdowns forced entertainment venues to close, Mr. Espy lost his job.

After being unemployed for one month, Mr. Espy, 59, was hired by a consulting company called Safety, Solutions and Supply. Before the pandemic, he was making $125,000 a year. Now, he earns $75,000.

The new job does not pay him enough to cover his expenses, including two car loans and the mortgage on his house in Valrico, Fla., where he lives with his wife and a 20-year-old son. To make ends meet, he is spending $2,000 of his savings each month.

“I would call myself underemployed,” he said. “I’m working at a reduced rate just to pay my bills.”

Even as some employers recall laid-off workers, others are concluding they can no longer stay in business. That has caused financial and emotional damage for owners and employees alike.

For Jackie Anscher, the closing of the boutique fitness studio where she taught spinning classes in Long Beach, N.Y., until March meant more than the loss of a job. It was the end of something she was passionate about and halted the deep connections she had built with clients.

“I miss it like I’ve lost a limb,” she said. “What started as an exercise class encompassed so much more. I’m a therapist on a bike. I’m sure a lot of people can relate to the emotional loss.”

Ms. Anscher, who taught eight to 10 classes a week, said her financial situation was stable because of her husband’s job. But there is nowhere to go to keep teaching as gyms remain closed.

“This was a forced retirement,” Ms. Anscher, 58, said. “I’m not ready to retire. I’m waiting to see how I can pick up the pieces.”

Stephanie Horowitz, the studio’s owner, didn’t think the moratorium on classes would be the end of her business, Ocean Ride, when it was imposed in March. She offered spinning classes over the internet, she said, “but it never took off the way we needed it to.”

By mid-July, the financial drain was too great, and she decided to shut down after seven years. Some of the bikes have been sold, and Ms. Horowitz has been cleaning out the space on the South Shore of Long Island, a few blocks from the Atlantic. Seven part-time workers, including Ms. Anscher, have lost their jobs.

“We were a staple in the community, and we had a good run,” Ms. Horowitz, 40, said. “It’s emotional. We had just bought new bikes last year. Who knows what the future holds for any of us?”