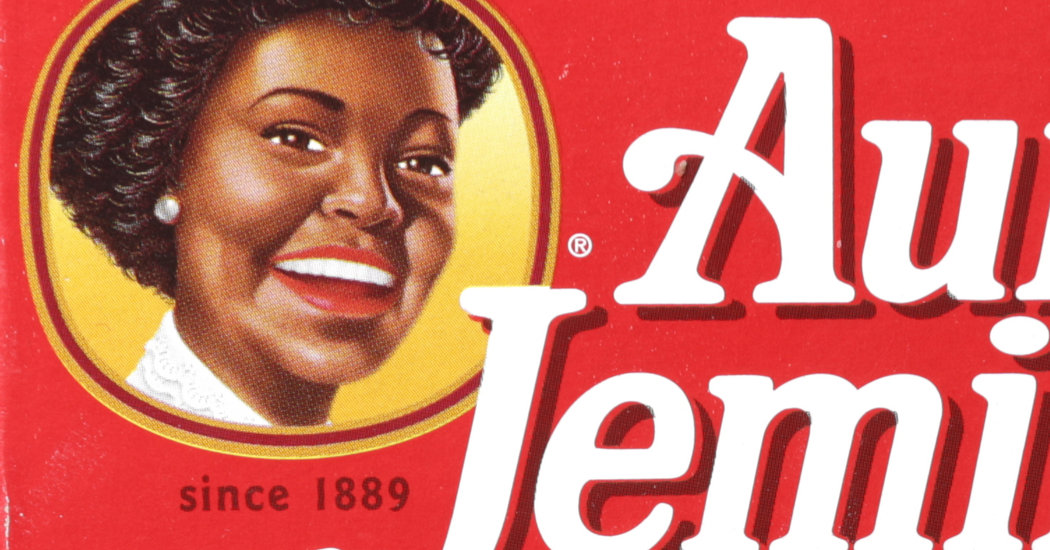 Aunt Jemima, a syrup and pancake mix brand, will get a new name and image after Quaker Oats, its parent company, acknowledged that its origins were “based on a racial stereotype.”

The brand, founded in 1889, is built on images of a black female character that have often been seen as a symbol of slavery. Aunt Jemima has gone through several redesigns; pearl earrings and a lace collar were added in 1989.

On Wednesday, Quaker Oats, which is owned by PepsiCo, said that it was taking “a hard look at our portfolio of brands” as it worked “to make progress toward racial equality through several initiatives.” The packaging changes, first reported by NBC, will begin to appear toward the end of this year, with the name change coming soon after.

“While work has been done over the years to update the brand in a manner intended to be appropriate and respectful, we realize those changes are not enough,” said Kristin Kroepfl, Quaker’s chief marketing officer, in a statement.

After the Quaker Oats announcement, the food and candy giant Mars said it was “evaluating all possibilities” concerning the rice brand Uncle Ben’s, which has been marketed through a character that has long been criticized as a racial stereotype. Mars said it did not know the exact changes or timing, but that it had a responsibility as a global brand “to take a stand in helping to put an end to racial bias and injustices.”

“As we listen to the voices of consumers, especially in the Black community, and to the voices of our Associates worldwide, we recognize that now is the right time to evolve the Uncle Ben’s brand, including its visual brand identity, which we will do,” Mars said in a statement.

Amid nationwide protests over racism and police brutality in recent weeks, many companies rushed to express their solidarity with the Black Lives Matter movement, often running into accusations of hypocrisy. But PepsiCo was already familiar with the fallout: In 2017, it apologized for running an ad featuring Kendall Jenner, a white model, that was criticized for trivializing the movement.

PepsiCo bought Quaker Oats in 2001, inheriting the Aunt Jemima brand. Ramon Laguarta, the chief executive of PepsiCo, wrote in an article in Fortune this week that “the journey for racial equality has long been part of our company’s DNA.”

The Aunt Jemima brand has its roots in a 19th century minstrel song, “Old Aunt Jemima,” that expressed nostalgia for the South in the time of slavery. The brand was once described by Riché Richardson, an associate professor of African-American literature at Cornell University, as “an outgrowth of Old South plantation nostalgia and romance grounded in an idea about the ‘mammy,’ a devoted and submissive servant who eagerly nurtured the children of her white master and mistress while neglecting her own.”

Last week, the glorified depiction of slavery in “Gone With the Wind,” which included a portrayal of an affable black character named Mammy, led HBO Max to temporarily remove the film from its catalog.

Quaker Oats said in its statement that Aunt Jemima’s marketing had “evolved over time with the goal of representing loving moms from diverse backgrounds who want the best for their families,” but that it would gather more perspectives internally and from the black community to further shape the brand.

The Aunt Jemima brand will also donate at least $5 million over the next five years “to create meaningful, ongoing support and engagement in the Black community,” the company said.

Nancy Green, the first woman to play the role of Aunt Jemima for the brand, was born a slave in Kentucky in 1834. In 2014, two men sued PepsiCo and others, saying that they were the great-grandsons of Anna Short Harrington, who played the character from the 1930s until the 1950s. The following year, a federal judge dismissed the lawsuit, which sought $3 billion in royalties and other damages.

As outrage has mounted over the killing of George Floyd, a black man, by a white police officer in Minneapolis last month, Aunt Jemima has been one of many brands under pressure to adapt to the times.

The Washington Redskins football team, whose name and mascot have been subject to fierce debate for years, sparked accusations of hypocrisy earlier this month when it participated in a broader effort to support Black Lives Matter by posting a black box on social media. Other companies, such as Land O’Lakes, had removed stereotypical Native American imagery from their products before the recent protests.