The Stark Racial Inequity of Personal Finances in America 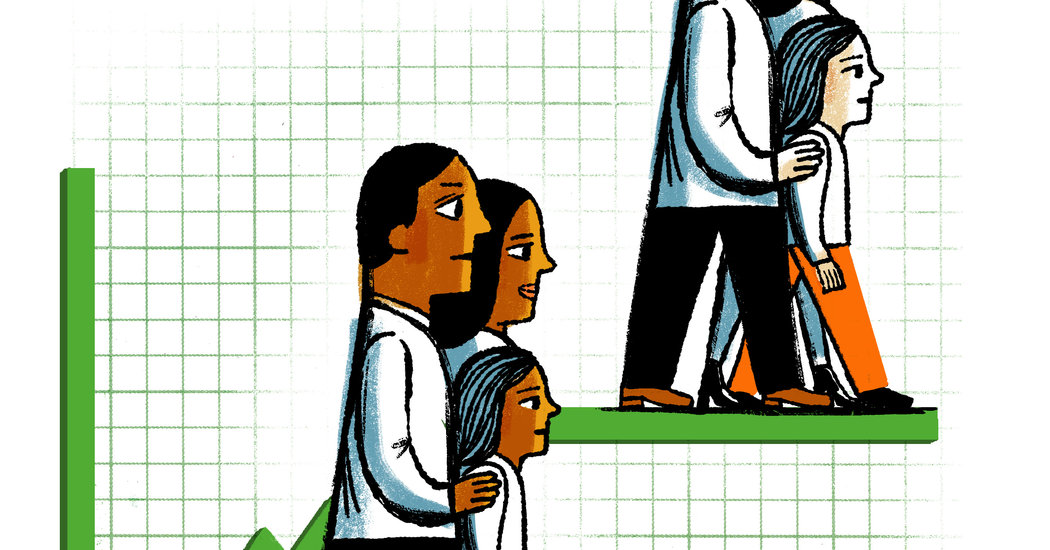 We cannot quantify the injustice of a white policeman holding his knee on the neck of a handcuffed, dying black man. And mere numbers cannot fully express the power imbalance involved in the deaths of George Floyd and too many others like him.

But we can measure the economic inequity that serves as their backdrop.

Dollars are like air — crucial to vitality. And when it comes to wealth, black Americans have less at nearly every juncture of life, from birth to death.

Perversely, having less can cost more. Black students borrow more to go to college, don’t finish as often and more frequently default on their student loans. They earn less, and generally have lower credit scores — so they pay higher interest rates. It’s harder for them to save for retirement, and they leave less to the next generation when they die.

An imbalance of societal power cannot be separated from cradle-to-grave economic inequality. This is what that looks like.

From board books for toddlers to quality care, it can be costly to get a child started in life. And black families typically have fewer financial resources to draw on.

Black families with a new baby have a median household income of $36,300, according to an analysis of 2018 census data by the Center on Poverty & Social Policy. For white families, it was more than twice as much: $80,000.

Black families were behind other groups, too. For Asian-Americans and Pacific Islanders, the median income was $105,600. Among multiracial families, the figure was $64,000. Hispanic families had $48,400 in income, and Native American and Alaskan Native families had $41,000.

Starting with less makes many things in the future that much harder. For example, every unspent dollar of earnings can potentially be saved for higher education.

A graduation gap in college

Once a child enrolls in college, graduating with a bachelor’s degree isn’t a given. But here, too, blacks have it worse than nearly any other group.

Their six-year completion rate through June 2017 for students starting at a four-year institution was 38.9 percent, according to data from the National Center for Education Statistics. For whites, it was 64.8 percent — even though both groups graduate from high school at roughly the same rate.

Asian-Americans (72.1 percent), mixed-race students (54.5 percent) and Hispanics (50.5 percent) were also ahead of blacks. Only Native Americans and Alaskan Natives finished at a lower rate: Just 26.3 percent within six years.

Starting but not finishing is often the worst of both worlds: Large numbers of these students end up with debt, but they don’t get the degree and the earnings boost that usually come with it.

A college education is supposed to help pave a path to financial security. For many black students, that’s far from guaranteed: They tend to borrow significantly more than their white peers, and they’re more likely to default on their loans.

Twenty-one percent of black graduates with bachelor’s degrees default. That’s more than five times the rate of their white peers (4 percent). Even white dropouts (18 percent) are less likely to default, according to a 2018 analysis by Judith Scott-Clayton, an associate professor of economics and education in the Economics and Education program at Teachers College, Columbia University.

She looked at data for people who started school for the first time in the 2003-4 academic year and analyzed their experiences over the next dozen years. Only 1.4 percent of Asian bachelor’s degree graduates defaulted during that period, with Hispanic graduates defaulting 8.6 percent of the time.

Black students who earned bachelor’s degrees also accumulated more debt than whites. They borrowed $21,149 on average, nearly twice as much as whites, by the time they left school. (This includes students who didn’t borrow at all.) But it got worse after that: By the end of the 12-year period that Ms. Scott-Clayton examined, blacks owed $64,142 — three times as much as whites. That’s because black degree-holders had both higher levels of graduate school borrowing and lower rates of repayment.

Even with a college degree, black Americans can’t count on getting a paycheck of the same size.

The black/white wage gap was significantly wider in 2019 than at the start of the century — even as Hispanic workers have slightly narrowed their own gap with white workers, according to research from the Economic Policy Institute.

But the gap isn’t a function of differences in education levels. Even among those who attain advanced degrees, blacks were paid 82.4 cents for every dollar earned by their white peers. Hispanics do better, at 90.1 cents on the dollar.

And the gender pay gap expands the racial gap into a chasm: Black women, on average, earn 64 cents for every dollar a white man earns, according to another report from the institute.

The widest homeownership gap in 50 years

The home is the largest asset for many American families, which may help build wealth over time. Paying down a mortgage often serves as a forced savings plan, enabling families to build equity that they can tap in retirement or leave to their heirs.

Black families have long been behind their white peers in homeownership, but that gap is the largest it has been in a half-century, according to the Urban Institute.

“The gap in the homeownership rate between black and white families in the U.S. is bigger today than it was when it was legal to refuse to sell someone a home because of the color of their skin,” the Urban Institute wrote.

Fewer retirement accounts, with less in them

The science of measuring retirement assets is imperfect, because older Americans can draw on any number of resources if they have them, including home equity, a pension and Social Security.

Those assets aren’t as flexible, however, as a workplace savings plan like a 401(k) or an individual retirement account. Blacks are less likely to have such accounts, and tend to have less in them when they do.

Sixty percent of white families have at least one retirement account, while just 34 percent of black families do, according to the most recent Federal Reserve Survey of Consumer Finances, which drew on data from 2016. Hispanic families have even fewer, at 30 percent. (The survey does not break other groups into distinct categories.)

Families with white heads of household have balances that dwarf the holdings of families headed by blacks, according to the Employee Benefit Research Institute, which looked at the same Federal Reserve data and measured families with family heads between the ages of 55 and 64.

Less left over for the next generation

The imbalance in homeownership and retirement accounts makes it unsurprising that white households are more likely to receive an inheritance than black ones. In fact, they are about two and a half times as likely to do so, according to research from two Fed economists, Jeffrey P. Thompson and Gustavo A. Suarez.

They looked at households headed by people ages 30 to 59 in 2013 and 2016. Twenty-three percent of white families reported having received an inheritance. Just 9 percent of black families answered affirmatively, and only 5 percent of Hispanic families did so.

So even if white families had fallen behind in the first part of adulthood, they had a better chance of catching up with a single boost. And those who are already doing better widen the gap further when a relative dies.

At that point, the process begins anew for their kids. And their kids’ kids.

And here we are.