Welcome to Applebee’s! Can I Get You Started With Some Disinfectant? 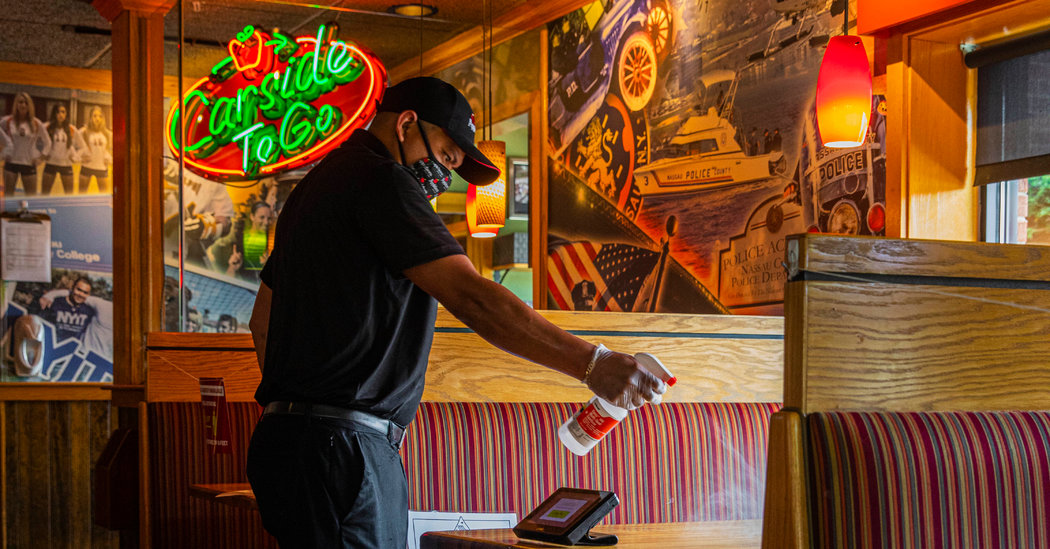 Applebee’s president, John Cywinski, said in an interview that Ms. Myers and others with the same pin now have the most important job in the restaurant. “At least from my perspective,” he said. “Our guests are cautious, and it reinforces our commitment to their safety and the safety of our team members.”

Mr. Cywinski has been heartened to hear from franchise partners that the average meal check is higher than it was before the pandemic. “And the average amount of time that people are staying is a little longer, too,” he added. “That suggests diners are ready for a night out. They’re not in a rush to have it over, and they’re not going to skimp. These are people who want to settle in, feel safe and enjoy their meal, take their time and then leave.”

Whether and when diners will return en masse is unclear. On Thursday, the parent company of Chuck E. Cheese’s filed for bankruptcy protection. Brinker International, the parent company of Chili’s, reported in early June that sales at its 873 open restaurants were down 11 percent, compared with the same period last year. That’s actually a heartening figure, said Nick Setyan, an analyst at Wedbush Securities, and similar to results he expects to see at Olive Garden, LongHorn Steakhouse and Texas Roadhouse.

“As capacity constraints expand, we’re actually seeing surprising strength in terms of customers coming back,” he said. “But it seems to vary by geography. So the Midwest, the South and Southeast seem a lot more willing to take the risk. In the Northeast and West Coast, demand isn’t that strong.”

That’s a concern for Fridays, which is based in Dallas but has a large footprint in New England and California. The company had intended to go public in late March — a plan it abandoned as the coronavirus set in. Instead, the company started to hold a standing 9 a.m. Zoom call, seven days a week. During the sessions, a team of about a dozen executives from different departments conceived a socially distanced restaurant, from the entrance to the back door.

The menu was pared down, in part so that the number of cooks would go from five to three. “We reduced the number of sautéed onions, so that we wouldn’t have two people back to back in that part of the kitchen,” said Ray Blanchette, the company’s chief executive. “Fewer sandwiches and salads, too.”

Bye-bye, shrimp and lobster pasta, chicken quesadilla and BBQ chicken salad. Feedback to the company’s call center led to adjustments. Spinach and artichoke dip, for instance, was ditched, then reinstated by popular demand.