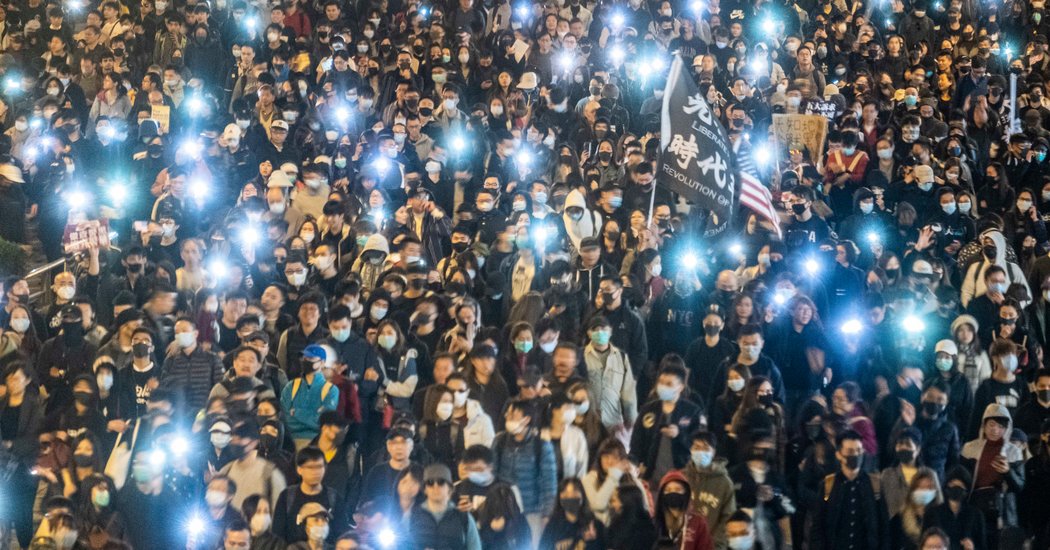 HONG KONG — China and its allies are using threats and pressure to get business to back Beijing’s increasingly hard-line stance toward Hong Kong, leading companies to muzzle or intimidate workers who speak out in protest.

Leung Chun-ying, Hong Kong’s former top leader, on Friday called for a boycott of HSBC, the London bank, because it had not publicly backed Beijing’s push to enact a new national security law covering the territory. “Neither China nor Hong Kong owes HSBC anything,” he wrote in a Facebook post. “HSBC’s businesses in China can be replaced overnight by banks from China and from other countries.”

Days earlier, a union representing financial workers filed complaints with Hong Kong financial regulators alleging that two Chinese banks had pressured their employees to sign a petition supporting the law. “Such behavior by a supervisor to compel employees to take political sides could be considered abusive,” the union wrote in letters to local officials.

Lawyers, bankers, professors and other professionals interviewed by The New York Times described a growing culture of fear in offices across the city. Employees face pressure to support pro-Beijing candidates in local elections and echo the Chinese government’s official line. Those who speak out can be punished or even forced out.

China and the United States are clashing over the future of Hong Kong, and global businesses are caught in the middle. President Trump on Friday said he would begin rolling back the special trade and financial privileges that the United States extends to Hong Kong after Chinese leaders pushed through the plan to enact the national security law, which critics fear will curtail the city’s independent judicial system and civil liberties.

Hong Kong’s success as a global financial hub stems from its status as a bridge between China’s economic miracle and the rest of the world. Now that balance is looking increasingly precarious.

Protests erupted last year after Hong Kong’s unpopular Beijing-backed government tried to give Chinese authorities more say in the city’s affairs. As it has pressured business to take its side, China has used access to its vast market as an incentive to toe the Communist Party line.

Cathay Pacific, the Hong Kong-based airline, drew headlines late last year when it fired employees for voicing views that angered Chinese authorities. Four of the world’s biggest accounting firms condemned the Hong Kong protests and distanced themselves from employees who supported them.

Mr. Ng was punished by his former employer for writing his political views on his Facebook page, using the phrase “monkey see, monkey do” to complain about pro-Chinese demonstrators. The comments, which were later taken down, were heavily criticized in China’s state media and on the Chinese internet. BNP apologized and pledged to take immediate action. Mr. Ng then left the bank.

“There is this awful environment now,” said Mr. Ng, who has co-authored a book about the pressure in Hong Kong called “Unfree Speech.” “The whole banking industry, at least Chinese-funded banks, they face quite a lot of pressure from China.”

Something similar happened to Ka-chung Law, a high-profile economist at Bank of Communications, a state-backed Chinese bank. For two decades, Mr. Law said he never felt any topic was off limits.

Last summer, as violence flared, Mr. Law was told not to talk about the role that the political chaos was having on the local economy. It was a difficult proposition. He could see it was having a direct impact.

Then in early October, Mr. Law said, he emailed an article to his team that was critical of China and discussed ways in which the United States could punish Beijing economically. One of his bosses called him in.

The bank distanced itself from the article. Mr. Law’s note had come from his work email, therefore implicating the bank. “That day I was told, ‘This is your view,’” he said. “I was not the author of the article, but I didn’t want to argue.”

Mr. Law said he was told to resign. He did. “I don’t want to stay in that kind of environment,” he said, “and I don’t think I deserve to stay in the position if I keep my mouth shut.” The bank declined to comment.

The silencing of views different from Beijing’s on the protests can be both subtle and overt.

Gios Choong works for a Chinese state-backed company doing quarantine checks and quality control inspection at the Hong Kong border. When he first started out more than two decades ago, most of his colleagues were Hong Kongers, and the atmosphere was more open, he said. But in recent years, resentment built up as Hong Kong employees like himself were replaced with mainlanders.

These days, when conversation at work turns to the protests, managers label them as riots. Mr. Choong, who is a supporter of the pro-democracy protests, said he found it alienating.

“My boss said to me, ‘Why do they go out?’” referring to the protesters. “‘You eat from China. Your food is from China. The water comes from China. So why?’”

Increasingly, multinationals have found themselves in Beijing’s censorship cross hairs. The N.B.A. was thrust into the harsh spotlight last year after the general manager of the Houston Rockets wrote a message on Twitter in support of the Hong Kong protesters. State media acted swiftly in retaliation, canceling the broadcast of preseason games.

Coach, Givenchy and Versace have also been forced to apologize for selling clothes with designs that suggested Hong Kong was separate from China.

Until August, many of his weekends were devoted to teaching part-time M.B.A. students in the mainland. Then he was photographed at a protest with Jimmy Lai, the owner of a media group who is critical of China.

When his students saw it, they wrote to university officials to complain about Mr. Ng’s participation, requesting in a letter that the university delete “any information about him during the process of our study and in our graduation thesis” and threatening to boycott events where Mr. Ng was in attendance.

After discussing the situation with the university, Mr. Ng agreed to stop teaching at the Chinese campuses. “I don’t blame them,” Mr. Ng said. “In China, everyone is under a tightly controlled system. I appreciate that they did this to protect themselves politically.”

Christina Wu, a spokeswoman for the university, confirmed Mr. Ng’s change of schedule but said it was done “purely based on academic considerations.” She said the university did not delete any information about Mr. Ng.

This week, as Beijing pushed on with plans to implement its national security law in Hong Kong, pro-Beijing groups fanned out across the city in search of support. According to some local workers, their bosses helped in the effort.

Managers at Chiyu Banking Corporation, a local bank owned by Xiamen International Bank, sent a WhatsApp message to employees asking them to sign a petition, according to a complaint filed by the Hong Kong Financial Industry Employees General Union. Once they had done so, the complaint said, they were told to screenshot their signature and share it.

Similar instructions were sent to employees at Wing Lung Bank, according to the union. Workers at other banks said they had received similar messages, said Ka-wing Kwok, the union’s chairman, but the union was unable to verify them.

Chiyu Banking and Wing Lung Bank did not respond to requests for comment. Hong Kong regulators declined to comment.

“Such behavior caused a chilling effect among employees,” the union wrote in letters to the Hong Kong authorities.

“Employees could not help worrying that if they do not obey the instructions of their superiors, they might either be singled out by the company or their personal work performance evaluation would be affected in the future.”