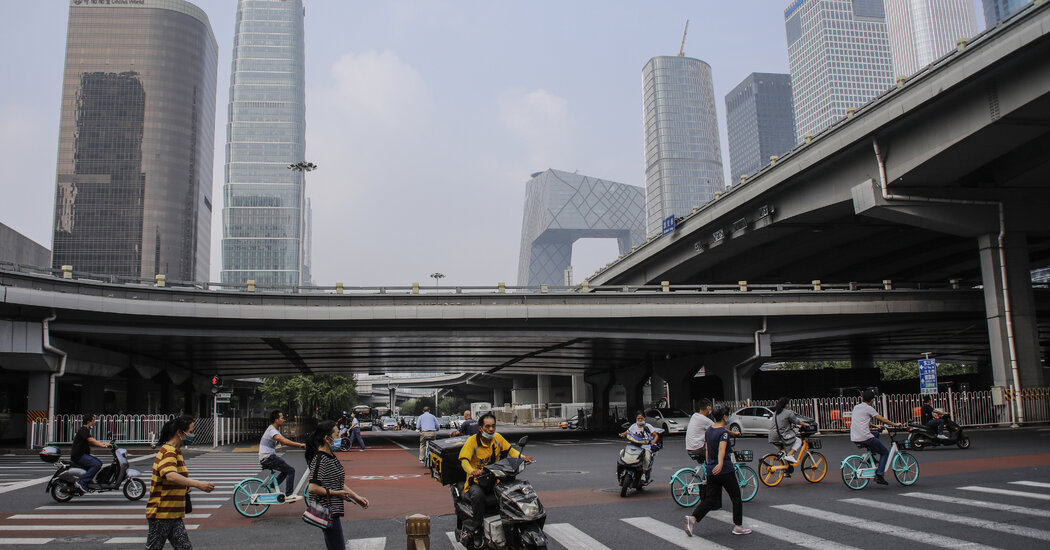 Now Xi Jinping, China’s current leader, has his own message for the country’s private businesses that reflects a drive for both economic growth and greater Communist Party control: We’re here to help you, but you must also help and heed us.

The party that leads the world’s second-largest economy after the United States laid the groundwork this week for greater party influence over private business, while also promising them more support and opportunities to convey their needs.

Though lacking many specifics, the guidelines underscored the competing economic and political undercurrents bearing on Mr. Xi’s government. China needs to shore up growth, especially after a hit from the coronavirus epidemic. At the same time, Mr. Xi sees smaller private firms as a weak spot in his efforts to secure Communist Party dominance across society.

“Unify members of the private sector around the party, and do better in promoting the healthy development of the private economy,” Mr. Xi said in orders to officials published Thursday by People’s Daily, the party’s main newspaper.

The official instructions are likely to reinforce accusations from critics of Beijing, including members of the Trump administration, that China’s private businesses must follow the orders of the Communist Party. Hard-liners in Washington have pushed for broad limits on Chinese companies’ operations, most recently by demanding the sale of TikTok, the Chinese-owned social media app.

More broadly, the instructions reflect a long-running debate within China about the role of private business in a country where the government still controls crucial levers of industry. China emerged as a global economic power in large part by freeing entrepreneurs to open factories and find markets around the world.

That freewheeling approach has long unnerved some Chinese leaders who want businesses to hew more closely to the party’s strategic goals, which can range from strengthening sway abroad to lifting people out of poverty in underdeveloped parts of the country.

“It has been an ongoing dilemma about co-optation and ensuring loyalty, while allowing sufficient autonomy to develop a competitive economy,” said Kellee Tsai, a political scientist at the Hong Kong University of Science and Technology who studies China’s private entrepreneurs, in a telephone interview. “I think it really reasserts the party’s leadership and authority. I think that’s really the primary message.”

The instructions amount to an acknowledgment in part that China needs its retailers, manufacturers and online services to create more jobs to offset global economic uncertainties. Mr. Xi has already laid out a post-pandemic strategy of relying more on domestic activity for economic growth, suggesting that the government will give private businesses more support and opportunities.

Officials must establish additional channels for business owners to share their needs and grievances. Above all, the new directive admonishes officials to accept the private sector as a vital part of China’s economy. “Fully grasp that the existence and development of the private sector is long term and inevitable,” it says.

At the same time, the new directives call for ensuring that China’s rising capitalists are recruited into the party’s “united front” of allies, ready to support the government’s economic and political priorities.

Private entrepreneurs are “a pillar of employment in China, and also a pillar of innovation,” Li Su, a business consultant in Beijing, said in a telephone interview.

But he used a catchphrase of Mr. Xi’s to explain the other side of the equation: “When it comes to the party leading all — north, south, east, west and center — the heart of the matter is relations with private business.”

Businesses must build up party organizations, the guidelines said, implying that internal Communist Party committees will be more active in companies. Entrepreneurs should receive instruction to ensure they “identify politically, intellectually and emotionally” with the party, the guidelines said.

“I think that the party’s foundation for rule lies in constantly understanding community sentiment and feedback, and these platforms play that role,” said Wang Xiangdao, the chief executive officer of MoSeeker, a Shanghai-based recruitment company who said he supported the initiative. He said he planned to attend a three-day training session organized by the United Front Department, the party’s arm that manages ties with religious, ethnic and social groups, now clearly including businesspeople.

“This united front work has been happening all along, and so this wasn’t out of the blue, but this time it’s clearer and more systematic,” he said.

That party officials would need to hear such a warning suggests how much China has changed politically since Mr. Xi came to power in 2012, vowing to revive the party and reinvigorate state-owned companies.

Over 30 years earlier, Deng’s generation of reformist leaders revived the private sector that Mao had largely snuffed out. In the next decades, China’s entrepreneurs grew into prosperous capitalists, such as Li Shufu, who started a small business making refrigerator parts and then motorcycle parts. He now owns Volvo Cars and has a sizable stake in mighty Daimler of Germany.

But China’s entrepreneurial class attracted suspicion from some party officials as it grew. After he came to power, Mr. Xi started a ferocious anticorruption drive that left many business owners wary of dealing with government officials. His robust rhetoric about the importance of the state sector and party dominance increasingly worried business leaders.

After business confidence shrank, Mr. Xi sought to reassure Chinese business owners in 2018 through a series of meetings and policy concessions. The latest pronouncements appear to be intended to reinforce those assurances, said Zhu Ning, a deputy dean of the Shanghai Advanced Institute of Finance.

“It’s probably a real, reassuring message to private enterprises,” he said. “This is to say, ‘No, no, no, you are still part of us.’”

Still, the new plan also seeks to ensure that the private sector does not become an enclave of opposition to the party. Few Chinese entrepreneurs have dared to resist Mr. Xi openly, but he appears determined that not even small cracks open in the party’s power.

This month, the police in Beijing detained Geng Xiaonan, a businesswoman who operates a publishing firm, after she spoke up for Xu Zhangrun, a law professor who excoriated Mr. Xi’s hard-line policies. The police said Ms. Geng and her husband were suspected of illegal business activities. Their supporters say the arrests were payback for her activism.

A court in Beijing said this month that Ren Zhiqiang, a blunt-speaking retired executive from a state-run property developer who denounced Mr. Xi’s initial handling of the coronavirus outbreak, would stand trial on corruption charges. There was no official confirmation that a trial of Mr. Ren, who had become a defender of private enterprise, has taken place. His family has not issued any comment.

The Chinese government should be more worried about dispirited entrepreneurs who quit business, and sometimes emigrate, out of frustration with tax and fee burdens and needless government interference, said Sheng Hong, an economist in Beijing who has called for the private sector to have more scope and say.

“Generally, they won’t go into opposition, but they will leave the scene,” he said. “Some will work for years, saving up, but may shut down their businesses if they don’t think the opportunities are good.”

China needs its private sector. While state-owned companies benefit from government favors and nearly limitless credit from state-controlled banks, small and medium-size businesses have played a far larger role in the country’s remarkable growth. When the coronavirus pandemic was at its worst in China in February, the government put heavy pressure on banks to lend more money to small businesses.

Mr. Li, the consultant, said he had already advised Chinese companies on how to balance business needs and social and economic goals set by the party. The new policy could mean more such work.

“How to finally find that interface — of helping the boss make money while helping the government get things done — is something that they study day in and day out,” he said.