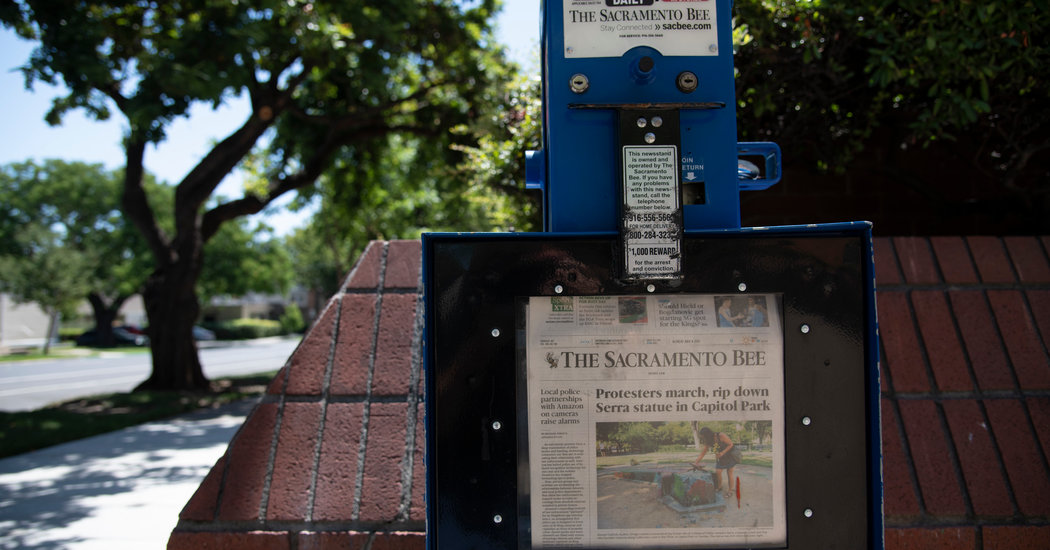 A battle of the hedge funds is brewing in the bankruptcy auction of the McClatchy Company, one of the nation’s largest and most decorated newspaper chains, pitting Chatham Asset Management and Brigade Capital Management, both debt holders in the chain, against a newcomer to the proceedings, Alden Global Capital.

Chatham and Brigade seemed to have an advantage going into the planned court-supervised sale of McClatchy. In April, McClatchy said it had received an offer worth more than $300 million from the two firms. The bid came after Chatham and Brigade had taken on much of McClatchy’s debt in a Chapter 11 restructuring. The two hedge funds planned to use that debt as part of the bid, which would keep the chain, with 30 newsrooms across the country, intact.

Alden, a New York hedge fund that has become a force in the newspaper business, tried to disrupt the Chatham-Brigade proposal on Wednesday by filing an emergency motion in a U.S. Bankruptcy Court. Alden asked Judge Michael E. Wiles to stop any attempt to buy McClatchy through a credit bid, a transaction that would allow Chatham and Brigade to use the company debt they had assumed toward the purchase price.

Alden’s maneuver suggested that it, too, had an interest in acquiring McClatchy, a 163-year-old chain that fell on hard times not long after its $4.5 billion purchase in 2006 of a much larger rival, Knight Ridder.

At a remote hearing on Thursday, Alden’s interest was confirmed by a lawyer for the hedge fund, Lisa G. Beckerman of Akin Gump Strauss Hauer & Feld. She said Alden was prepared to “top” the previous bid, but argued that Chatham and Brigade would have an unfair advantage if they were allowed to make the debt they had accrued part of their offer. Judge Wiles denied Alden’s motion, permitting Chatham and Brigade to go ahead with their plan.

The court also scheduled a new date for the start of the auction process, setting it for Friday. It had previously been scheduled to start on Wednesday.

Chatham is not a newcomer to the newspaper industry. It is the principal owner of American Media Inc., which operates the National Enquirer supermarket tabloid, and a major investor in Postmedia, the publisher of Canadian newspapers including The National Post, The Montreal Gazette and The Ottawa Citizen.

A lawyer identified as a representative of the Knight Foundation listened in on the hearing as a nonparticipant. The Knight Foundation is a journalism nonprofit organization with an endowment of more than $2 billion. It originated with the family whose newspaper chain merged with another to form Knight Ridder, the company bought by McClatchy 14 years ago.

McClatchy, a business that has been in the same family since 1857, with the founding of the forerunner of The Sacramento Bee, is the publisher of The Miami Herald, The Charlotte Observer and The Kansas City Star, among other major dailies. A consistent winner of top journalism prizes, it says it is the second-largest newspaper chain in the United States.

The Alden-owned MediaNews Group has drastically cut costs at newspapers it manages. In 2018, staff members at The Denver Post, a MediaNews Group daily, openly rebelled, publishing a special section filled with articles critical of ownership. “If Alden isn’t willing to do good journalism here,” The Post’s editorial board wrote in the lead editorial, “it should sell The Post to owners who will.”

Alden owns 32 percent of Tribune Publishing, the chain that operates The Chicago Tribune, The Baltimore Sun and newspapers in nine other major metropolitan areas in the United States. Last week the hedge fund increased its influence on Tribune Publishing when it gained a third seat on its seven-member board. Alden also has an interest in another newspaper chain, Lee Enterprises, and its MediaNews Group controls roughly 200 publications.

From 2004 to 2019, roughly half of all newspaper jobs in the United States were eliminated as the cumulative weekday circulation of print papers fell to 73 million from 122 million, according to a University of North Carolina study.

At the same time, advertising revenue fell sharply as readers gave up print newspapers, a longtime home of lucrative retail ads and classified notices, in favor of digital devices. Google and Facebook came to dominate the online ad market, hampering publishers’ attempts to generate the necessary revenue from digital ads.

Wall Street ownership of newspapers has become common, and Alden helped drive that trend since the Great Recession, when it started grabbing stakes in distressed news media companies.