How the Government Pulls Coronavirus Relief Money Out of Thin Air 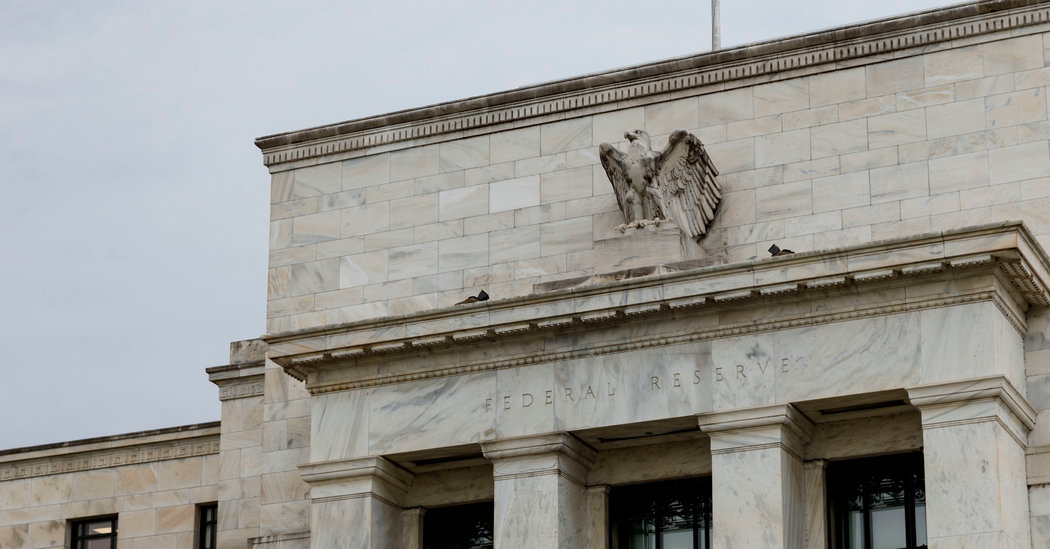 The United States has responded to the economic havoc wrought by the coronavirus with the biggest relief package in its history: $2 trillion. It essentially replaces a few months of American economic activity with a flood of government money — every penny of it borrowed.

And where is all that cash coming from? Mostly out of thin air.

The traditional view of economic theory holds that governments and central banks have distinct responsibilities. A government sets fiscal policy — spending the money it raises through taxes and borrowing — to run a country. And a central bank uses various levers of monetary policy — like buying and selling government securities to change the amount of money in circulation — to ensure the smooth operation of the country’s economy.

But the relief package, called the CARES Act, will require the government to vastly expand its debt at the same time that the Federal Reserve has signaled its willingness to buy an essentially unlimited amount of government debt. With those twin moves, the United States has effectively undone decades of conventional wisdom, embedding into policy ideas that were once relegated to the fringes of economics.

“It’s an epic moment in terms of breaking down the orthodoxy of church-and-state separation of the fiscal and monetary authority,” said Paul McCulley, a former chief economist of Pimco, a giant asset management shop.

Playing out in the background of this shift is a debate over what is known as modern monetary theory, which says countries that control their own currency can run much larger budget deficits than they typically do, in part because of the power of central banks to create new money to help finance the shortfall.

But to the theory’s adherents, the lock-step maneuvers by the Fed and the government were not the arrival of a far-out idea but the removal of a fig leaf.

“What it’s doing is just making more transparent a relationship between the Treasury and the Fed that has always existed,” said Stephanie Kelton, a professor of economics at Stony Brook University and one of the theory’s major advocates.

On March 23, facing a roughly 30 percent stock market crash and growing dysfunction in key bond markets, the Fed announced its latest, and most significant, plan to pump cash into the financial system. The central bank said it would basically buy an unlimited amount of Treasury bonds and government-backed mortgage bonds — whatever was necessary “to support smooth market functioning.”

In the world of central banking, this muted statement qualified as seriously radical. The new policy didn’t put a number on the bonds the Fed would buy, a tacit nod to the idea that it could buy unlimited amounts.

Then, within days, President Trump signed a $2 trillion economic rescue package into law. That package alone equaled about half of what the federal government spent in all of 2019.

Nobody knows exactly how much the relief bill will add to the national debt; it was cobbled together so quickly that there wasn’t time for the Congressional Budget Office to carry out an analysis, though one is expected to be published this week. But the Fed will be the biggest buyer by far of the bonds the government will sell to fund this spending.

Goldman Sachs analysts estimate the Fed will buy $2.4 trillion in Treasury securities as part of its recently reintroduced bond-buying programs. Economists at Morgan Stanley put the number at around $2.5 trillion.

But the Fed isn’t an ordinary bondholder: By law, it has to pay its profits to the Treasury.

That means when the Treasury makes payments on bonds held by the Fed — either paying interest or paying it off at maturity — almost all the money eventually moves back to the Treasury.

When a government bond is involved, the cash moves from one government pocket to another.

“Once the central bank buys them, it’s as if the Treasury never issued them in the first place,” said Dr. Kelton, who was an adviser to Senator Bernie Sanders’s 2016 presidential campaign. “For all intents and purposes, they’re retired.”

The CARES Act borrowing is, in many ways, the natural result of an evolution that began with the 2008 financial crisis. The bond-buying programs that central banks undertook around the world helped ensure low-cost financing for governments running giant deficits as policymakers contended with a deep recession and a prolonged period of lackluster growth. And despite constant, high-decibel warnings that such an approach would surely ignite a surge of inflation, it never happened.

That was a legitimate concern: Financial historians often point to disastrous periods when a central bank printed money for the government to pay its debts. A common example is Weimar Germany, when the central bank churned out banknotes that allowed the fragile government to repay onerous World War I reparations with essentially worthless marks, impoverishing most of the country in the process.

But at other times, the idea has worked just fine: Japan’s central bank has been buying huge chunks of the government’s bonds — effectively financing the central government of the world’s third-largest economy for years — without triggering the kind of inflation that traditional economic views would expect.

Adherents of M.M.T. have long argued that the United States can — and probably should — run much larger budget deficits than it did already. In recent years, this belief has been most often associated with left-leaning politicians such as Mr. Sanders and Representative Alexandria Ocasio-Cortez of New York.

But the ideas have found broader currency in some unlikely places, such as Wall Street. In recent years, some at huge money management firms and gold-plated investment banks have increasingly turned to M.M.T. as a useful analytical framework to understand the strong links between central banks and markets that have grown since the financial crisis.

“M.M.T. has been invoked so many times by completely mainstream people and politicians,” said L. Randall Wray, a professor of economics at Bard College who has written seminal papers on modern monetary theory. “Even Trump used almost word for word what we’ve been saying all along.” (“You never have to default because you print the money,” Mr. Trump said as a candidate in 2016.)

Other experts counter that coordination between the Fed and the Treasury may be justified in a national crisis, but that a continuing large-scale expansion of government deficits could have negative consequences, such as higher inflation.

“I think the Treasury did the right thing. I think the Fed is doing largely the right thing,” said Glenn Hubbard, a professor of finance and economics at Columbia University. “There shouldn’t be an ongoing dance of borrowing money and printing money. This isn’t the lesson to learn from this episode.”

Even so, the growing comfort with the Treasury Department’s relying on the Fed to buy its bonds — and help finance large deficits — is an important shift in the conventional thinking of politicians and policymakers, said Mr. McCulley, who retired from Pimco in 2015 and now teaches at Georgetown University.

“What this crisis has brought to the forefront is that this isn’t an academic debate anymore whatsoever,” he said.

Mr. McCulley said the speed with which the crisis took hold — and the unique circumstances of a nearly nationwide lockdown of consumers — meant political leaders had little choice but to vastly expand deficits. And, he said, those who usually question how deficits will be paid for have been rendered mute.