How the Virus Transformed the Way Americans Spend Their Money 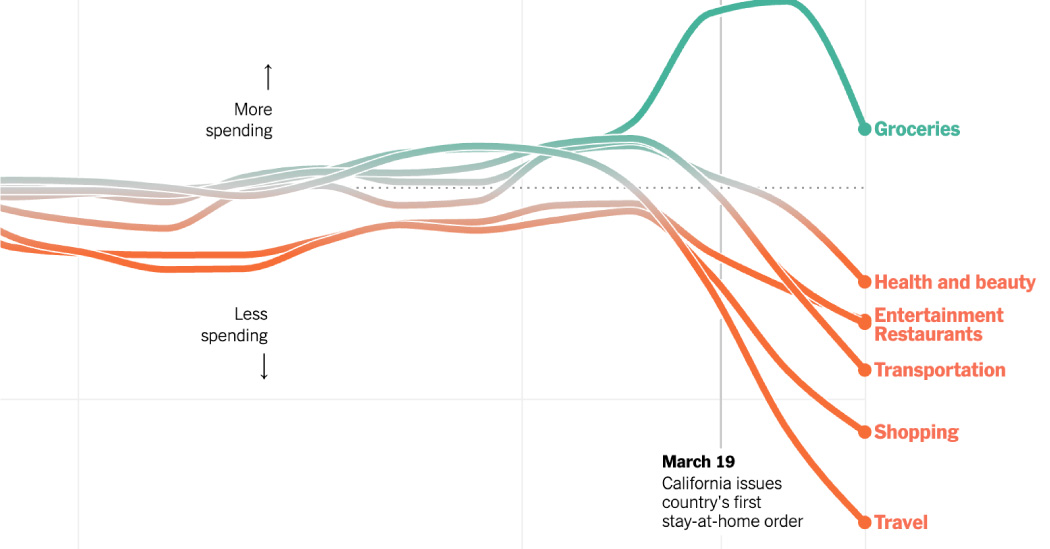 The chart shows the percentage change in spending from the beginning of the year. Each line is an average of the previous two weeks, which smooths out weekly anomalies. | Source: Earnest Research

The coronavirus has profoundly altered daily life in America, ushering in sweeping upheavals to the U.S. economy. Among the most immediate effects of the crisis? Radical changes to how people spend their money.

In a matter of weeks, pillars of American industry essentially ground to a halt. Airplanes, restaurants and arenas were suddenly empty. In many states, businesses deemed nonessential — including luxury goods retailers and golf courses — were ordered closed.

“This is the sharpest decline in consumer spending that we have ever seen,” said Luke Tilley, chief economist at Wilmington Trust.

All of the charts in this article are based on a New York Times analysis of data from Earnest Research, which tracks and analyzes credit card and debit card purchases of nearly six million people in the United States. While the data does not include cash transactions, and therefore does not reflect all sales, it provides a strong snapshot of the impact of the virus on the economy.

Some companies like Walmart, Amazon and Uber Eats have seen spikes in purchases. But customers of many other businesses have simply stopped spending, the data shows.

Change in spending from 2019 for the week ending April 1. Bubbles are sized by industry sales.

How people spend determines which companies survive, and who has a job. In recent weeks, more than 16 million workers in the country have filed for unemployment. And with no end to the outbreak in sight, consumer spending is likely to be fundamentally different for many months to come.

Here’s a look at how it has already been shifting.

Grocery sales are way up, as people cook at home.

As restaurants closed and people began staying home last month, grocery stores experienced a surge in demand. In a 7-day period that ended on March 18, grocery sales were up 79 percent from the previous year. There were runs on many household staples, including pasta, flour, toilet paper and soap. Processed foods and canned goods were back in vogue.

Sales have fallen since then, but they are still higher than normal for this time of year. Between March 26 and April 1, sales were up 7 percent. Among the biggest winners: online grocery delivery services and meal kit companies.

Spending on travel has slumped as people hunker down.

Stay-at-home orders issued around the country in recent weeks helped decimate the travel industry. Spending on airlines, hotels, cruises and rental cars has all but stopped. Online travel booking sites like Expedia, Airbnb and Priceline have seen their sales plunge.

And it is only getting worse. Sales in the travel sector have declined rapidly over the past month, with revenues for the week ending on April 1 down 85 percent from the same time a year earlier.

Not this time. With social distancing the norm, most restaurants around the country have been ordered to stop offering sit-down service. Fine dining, casual dining and fast food have all been hit, with companies from Momofuku to McDonald’s feeling the pain. (Some restaurants are offering takeout, and delivery aggregators like Seamless have seen sales surge.)

Beyond contributing to a record surge in unemployment claims, the ruined restaurant industry is likely to aggravate the country’s broader economic woes.

“The service economy has traditionally been the thing that has helped keep the downturn from going too low,” Mr. Tilley said. “In this case, the forced stoppage of consumer spending on these things is precipitating the economic crisis.”

Spending on media and entertainment is mixed, with many losers and a few winners.

Many of America’s favorite diversions are simply off limits for now. Movie theaters are shuttered. Theme parks are closed. Clubs and concert halls have all gone quiet.

But while most types of entertainment that require people to congregate are on hold, there are a few bright spots. Spending on video game companies like Twitch and Nintendo is booming, and streaming services, including Netflix and Spotify, are enjoying gains as well.

Shopping is down overall, especially at brick-and-mortar stores.

Even before the coronavirus, the retail industry was reeling as it struggled to adapt with the rise of e-commerce and discount brands. The current crisis has made things that much worse. Department stores, fast fashion, sneaker shops and others in the industry saw revenues dive in recent weeks.

Spending on transportation is way down, with streets and subways empty.

For many, working from home has meant an end to commuting. As a result, taxis, ride sharing companies like Uber and Lyft, mass transit and parking services have all seen precipitous declines in sales. Scooter sharing companies like Lime and Bird, which were booming, have suffered potentially fatal blows. And with fewer cars on the road, car sales and auto parts sales are also down.

Spending is even down broadly across the health care industry for now, as those who conduct elective procedures, dentists and specialists not working on the coronavirus response are doing less business. Some hospitals, faced with lower revenues from canceled nonemergency work, have furloughed or cut the pay of doctors, nurses and other staff members.

“Surprisingly, we have actually seen a decline in health care spending,” Mr. Tilley said, “even in this environment.”