‘Nowhere to Hide’ as Unemployment Permeates the Economy 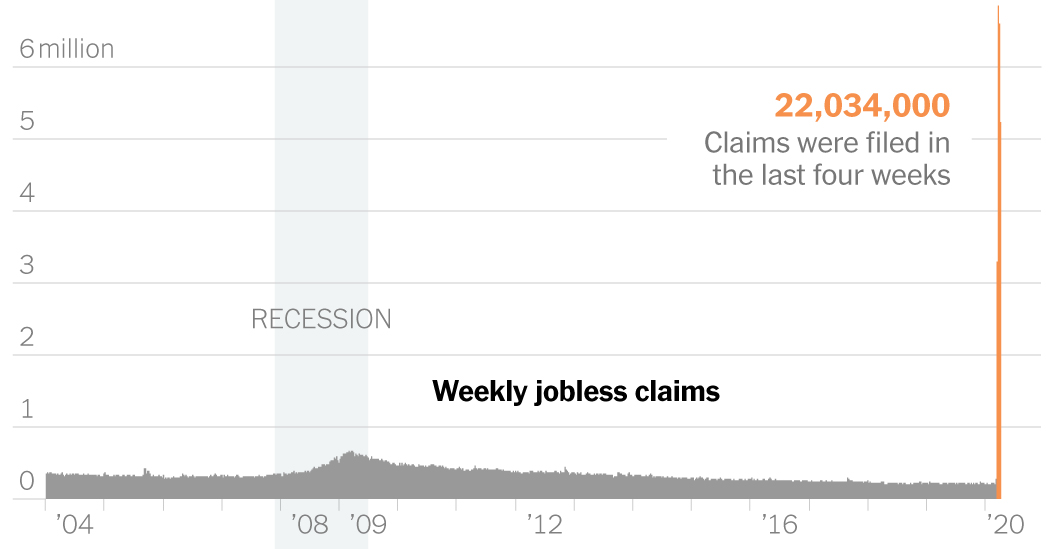 Even as political leaders wrangle over how and when to restart the American economy, the coronavirus pandemic’s devastation became more evident Thursday with more than 5.2 million workers added to the tally of the unemployed.

In the last four weeks, the number of unemployment claims has reached 22 million — roughly the net number of jobs created in a nine-and-a-half-year stretch that began after the last recession and ended with the pandemic’s arrival.

The latest figure from the Labor Department, reflecting last week’s initial claims, underscores how the downdraft has spread to every corner of the economy: hotels and restaurants, mass retailers, manufacturers and white-collar strongholds like law firms.

“There’s nowhere to hide,” said Diane Swonk, chief economist at Grant Thornton in Chicago. “This is the deepest, fastest, most broad-based recession we’ve ever seen.”

Some of the new jobless claims represent freshly laid-off workers; others are from people who had been trying for a week or more to file. “We’re still playing catch-up on multiple fronts,” Ms. Swonk said.

Each day seems to bring unwelcome milestones. On Wednesday, the Commerce Department reported the steepest monthly drop in retail sales since record-keeping began nearly 30 years ago, and the Federal Reserve said industrial production had recorded its biggest decline since 1946.

The mounting unemployment numbers seem certain to fuel the debate over how long to impose stay-at-home orders and restrictions on business activity. President Trump has said some measures should be relaxed soon because of the impact on workers. “There has to be a balance,” he said at a press briefing Wednesday evening. “We have to get back to work.”

Many governors and health experts are more cautious. If business conditions return to normal too quickly, they fear, a second wave of coronavirus infections could spread.

In the meantime, job losses are sure to mount, though perhaps at a slower pace.

“The silver lining with this bad number is that it looks like the wave of job destruction has peaked,” said Torsten Slok, chief economist at Deutsche Bank Securities. “Getting a date for reopening and getting more certainty about reopening is critical.”

Mr. Slok expects the unemployment rate to hit 17 percent this month, up from 4.4 percent in March and higher than any mark since the Great Depression. “These are truly stunning statistics that tell you the severity of the situation,” he said.“Let’s not forget we talked about 200,000 in jobless claims in January and February and now we are in the millions. That illustrates how bad a number this is.”

When restrictions are lifted, the recovery is expected to be gradual. “My worry is that it will be a slow rollout, as it should be, which means a slow recovery,” said Beth Ann Bovino, chief U.S. economist at S&P Global. “Turning on the U.S. economy isn’t like turning on a light bulb. It’s just too big.”

If businesses begin to reopen in May, “we wouldn’t be surprised to see one-third of the jobs lost come back by July,” she said. “But it will take years for unemployment to return to pre-crisis levels.”

Like the coronavirus outbreak itself, the situation for workers varied by state. Georgia, which did not issue a shelter-in-place order until April 3, showed the biggest increase in those filing unemployment claims, with a jump of 256,000.

Other states that were late to close, like Arizona and Alabama, also showed sizable increases. Michigan, whose state employment agency has struggled to deal with a flood of claims, had a jump of 84,219.

The government’s stimulus efforts have blunted the downturn’s effects, but many state employment agencies remain overwhelmed. Not only have they been inundated by unemployment claims, but they have also had to retool systems to handle new benefits mandated by the stimulus legislation.

Getting money quickly to people who need it is essential to limiting the economic damage and heading off a prolonged downturn, economists say. Relying on state unemployment offices, however — which had been set up and staffed to deal with record-low jobless rates — has resulted in mammoth delays.

In New York, the state’s call center handles 50,000 calls and 350,000 web visits in a typical week. In a peak week during the pandemic, it received 8.2 million calls and six million web visits.

The emergency relief enacted by Congress expanded benefits and eligibility to plug holes in an unemployment program that differs from state to state. The act extended jobless benefits to freelancers, part-timers, recent hires and other workers usually ineligible, added a $600 weekly supplement and offered an extra 13 weeks of benefits. But all of that assistance is not yet available in many states because of delays in adapting to the guidelines.

In Washington State, the volume of jobless claims last week was seven times the record pace set in the last recession, said Nick Demerice, public affairs director for the state’s Employment Security Department. A 2017 software upgrade helped avoid the backlogs that have plagued other states, he said.

Nevertheless, the state is more than doubling the number of workers it has in its call centers. “This all happened at once,” he said. “Unlike a typical economic downturn that happens incrementally, this is like a tsunami. We had staffing levels that were appropriate for the low unemployment we had. We are expanding our capability as fast as we can.”

In Rhode Island, technology remains the sticking point, said Scott R. Jensen, director of the state’s Department of Labor and Training. Its system is capable of handling a few thousand people daily who call or log in online. On Sunday, the department expects 90,000 people to try to access the system.

The state’s 50 call-center employees are working from home, and officials negotiated an outsourcing agreement with union representatives to bring in 20 more from a private company. Administrators also hope to persuade 20 former employees to return to work.

New York State upgraded its system last week and plans to hire 1,200 more people to handle the flood of applicants. It is also calling back workers who could file only partial claims in the past few weeks.

Fern Weinbaum, who lives on the Upper East Side of Manhattan, received such a call on Saturday after repeated frustration in getting through. “I called over 100 times a day without success,” said Ms. Weinbaum, 68, who was laid off from her position as a legal secretary at a small law firm late last month.

Without a paycheck or unemployment benefits, she dipped into savings to cover the rent in April. “I need that money to survive,” she said. But she still isn’t sure if her claim went through.

The benefits are also vital for Elyce Cooper, 68, who worked as an administrator at the Pavilion Grille, a catering hall and restaurant in Boca Raton, Fla. Ms. Cooper said she spent more than two weeks applying and experienced repeated crashes of the state website. If she missed filling in a line, she was forced to start from scratch. Then, despite the government-mandated shutdown, she was asked for proof that she was job-hunting.

According to the calculations on the website, Ms. Cooper said she should be eligible for the state’s maximum payment of $275 a week — about half of what she normally earns. She was eventually able to file for the first week she was out of work, but has not been able to get online for the certification needed for the second and third weeks, and she has yet to receive a check.

Ms. Cooper said she expected to be rehired when the pandemic eases. The promise of $1,200 in federal emergency assistance and a $600 supplemental unemployment benefit should enable her to cover her bills, she said.

For Eric Winstanley, 38, a co-owner of Custom Covers and Canvas in Niagara Falls, N.Y., this is normally the busiest time of the year. His firm makes patio awnings and fabric covers for boats but shut down last month.

He kept his 35 workers on the payroll through March before having to lay them off.

The jobs pay well for blue-collar work: $20 to $23 an hour. And the furloughed workers include several family members, cousins and nephews of Mr. Winstanley who have worked for the business for years.

“It was extremely difficult,” he said. “Everybody immediately expressed how they had bills to pay and families to feed, and that was one of the hardest parts of making this decision.”

With three unpaid volunteers, Mr. Winstanley has kept the workshop occupied churning out masks and face shields for local hospitals and essential businesses in recent weeks. “If that succeeds, we might recall a couple of workers,” he said. “Everyone is eager to come back to work.”