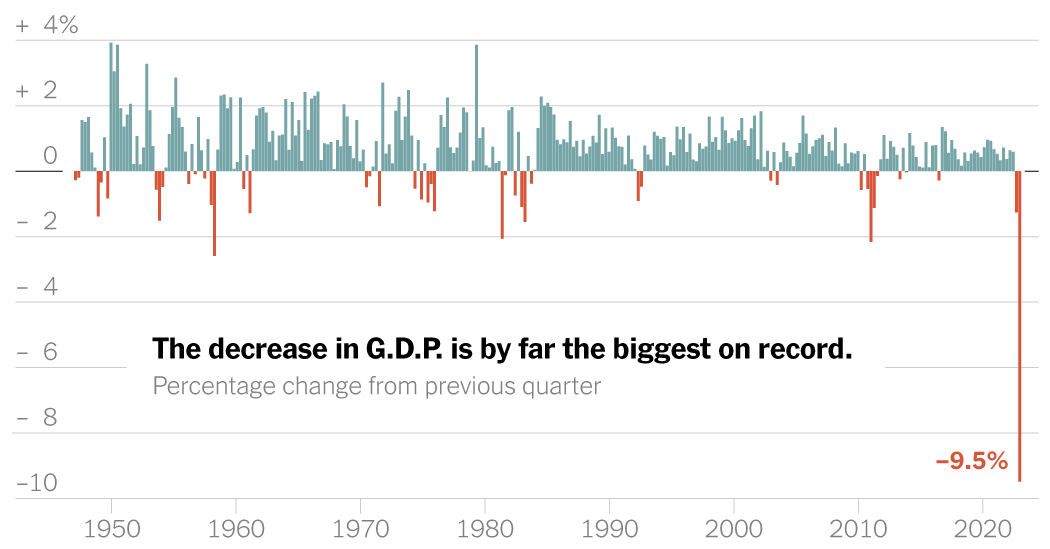 The coronavirus pandemic’s toll on the nation’s economy became emphatically clearer Thursday as the government detailed the most devastating three-month collapse on record, which wiped away nearly five years of growth.

Gross domestic product, the broadest measure of goods and services produced, fell 9.5 percent in the second quarter of the year as consumers cut back spending, businesses pared investments and global trade dried up, the Commerce Department said.

The drop — the equivalent of a 32.9 percent annual rate of decline — would have been even more severe without trillions of dollars in government aid to households and businesses.

But there is mounting evidence that the attempt to freeze the economy and defeat the virus has not produced the rapid rebound that many envisioned. A surge in coronavirus cases and deaths across the country has led to a renewed pullback in economic activity, reflecting consumer unease and renewed shutdowns. And much of the government support is on the verge of running out, with Washington at an impasse over next steps.

“In another world, a sharp drop in activity would have been just a good, necessary blip while we addressed the virus,” said Heather Boushey, president of the Washington Center for Equitable Growth, a progressive think tank. “From where we sit in July, we know that this wasn’t just a short-term blip. We did not get the virus under control.”

Data from Europe shows what might have been. Germany on Thursday reported a drop in second-quarter G.D.P. that was even steeper than the U.S. decline. But in Germany, coronavirus cases fell sharply and remain low, which has allowed a much stronger economic rebound in recent weeks.

In the United States, the rebound appears to have stalled. More than 1.4 million Americans filed new claims for state unemployment benefits last week, the Labor Department said Thursday. It was the 19th straight week that the tally exceeded one million, an unheard-of figure before the pandemic. A further 830,000 people filed for benefits under the federal Pandemic Unemployment Assistance program, which supports freelancers, the self-employed and other workers not covered by traditional unemployment benefits.

In total, some 30 million people are receiving unemployment benefits, a number that has come down only slowly as new layoffs — many of them permanent job losses, as opposed to the spring’s temporary furloughs — offset gradual rehiring. Some economists now fear that the monthly jobs report coming next week will show that total employment fell in July after two months of strong gains. The slow recovery, and signs of backsliding, are taking a toll on consumer confidence, which fell in July after rising in June.

“Not only have we plateaued, but we may be losing ground,” said Diane Swonk, chief economist at the accounting firm Grant Thornton in Chicago. “To have these kinds of numbers in July when many in Congress hoped this would be over by summer underscores how unique and persistent the Covid crisis is.”

The economic collapse in the second quarter was unrivaled in its speed and breathtaking in its severity. The decline was more than twice as large as in the Great Recession a decade ago, but occurred in a fraction of the time. The only possible comparisons in modern American history came during the Great Depression and the demobilization after World War II, both of which predated modern economic statistics.

Economists and epidemiologists alike describe the U.S. failure to control the virus during the initial shutdown as a missed opportunity. The government’s efforts at financial support were largely successful: After plummeting in March and April, retail sales rose in May and June as stimulus payments and a $600 weekly federal supplement to unemployment benefits began flowing into consumers’ bank accounts. Loans made under the Paycheck Protection Program allowed small businesses to begin bringing back furloughed workers.

The wave of evictions and foreclosures that many economists predicted early in the recession largely failed to materialize. But those programs have expired or are about to do so. And efforts to extend them have been delayed in Congress by disagreements — between the parties, and among Republicans — about how and how much to spend.

“The lesson from the early policy experiments is that it is possible to support the income of people and to offset those financial constraints,” said Tara Sinclair, a George Washington University economist and a senior fellow at the Indeed Hiring Lab. “But now as of today, we’re not going to have that anymore.”

The up-and-down nature of the recovery is shown by Russian River Brewing Company in Sonoma County, Calif.

Before the pandemic, half the company’s revenue came from retail sales: food and drink at its two brew pubs, tours and tastings at the brewery itself, in-person purchases of bottled beer. When California ordered restaurants to shut down in mid-March, all of that revenue disappeared.

“We were panicking for 48 hours,” said Natalie Cilurzo, who owns Russian River with her husband, Vinnie.

Once the panic passed, the Cilurzos began finding ways to plug the hole. With restaurants shut down, grocery-store sales surged, and online ordering proved to be a hit. A loan through the Paycheck Protection Program helped cover employee salaries and other expenses. And in early June, Russian River was allowed to reopen its brew pubs.

But it has been a partial and uneven rebound. Revenues are back more or less to normal levels, but profits are still down because margins are lower for grocery-store sales. The company has brought back most of its furloughed workers, but it has permanently laid off 20 percent of its staff. And one of its locations had to close again when California reimposed restrictions on indoor dining.

The G.D.P. report shows the severity of the temporary slowdown and hints at evidence of more lasting damage. Consumer spending fell 10.1 percent, led by a near-total collapse in spending on restaurant meals, recreational activities and other services. Even health care spending fell, as patients canceled elective procedures and delayed routine care.

Businesses, too, pulled back sharply on their investments, which Ms. Sinclair said was a worrying sign because it suggested they do not expect a rapid recovery in demand. And trade — both imports and exports — plunged, reflecting the global nature of the pandemic.

There were glimmers of optimism. Spending on goods fell a modest 3 percent, and some quarantine-friendly categories had increases. And while residential construction slumped in the second quarter, more recent data suggests the housing market has experienced a strong rebound, buoyed by low interest rates.

Many economists, however, caution that spending could fall further if Congress reduces or eliminates aid to households and businesses. And it would add to the stress on the unemployed, who are facing the expiration of extra jobless benefits at a time when the virus remains prevalent and jobs remain scarce.

Louise Francis had worked as a banquet cook at the Sheraton Hotel in New Orleans for nearly two decades when she was furloughed last spring. It took three months of effort to get her first unemployment check, and she relied on her adult daughters for help in the meantime. But when she began receiving the money, the $600 weekly federal supplement to regular state benefits allowed her to find some stability.

“With the $600, you could see your way a little bit,” Ms. Francis said. “You could feel a little more comfortable. You could pay three or four bills and not feel so far behind.”

With the supplement at an end and no congressional consensus on replacing it, Ms. Francis, 59, isn’t sure what she will do. Her age, combined with her diabetes and high blood pressure, puts her at high risk of severe illness if she contracts the coronavirus, which makes her reluctant to take any job that puts her into face-to-face contact with the public, especially with cases surging in Louisiana.

Ms. Francis’s husband is retired, leaving her as the family’s breadwinner, and she will have to get by on $247 a week in state benefits.

“If they take that $600 from us, how am I supposed to be able to continue paying my bills?” she said. “You still have to eat, to pay insurance. If they take it away, they’re going to push us back into poverty.”