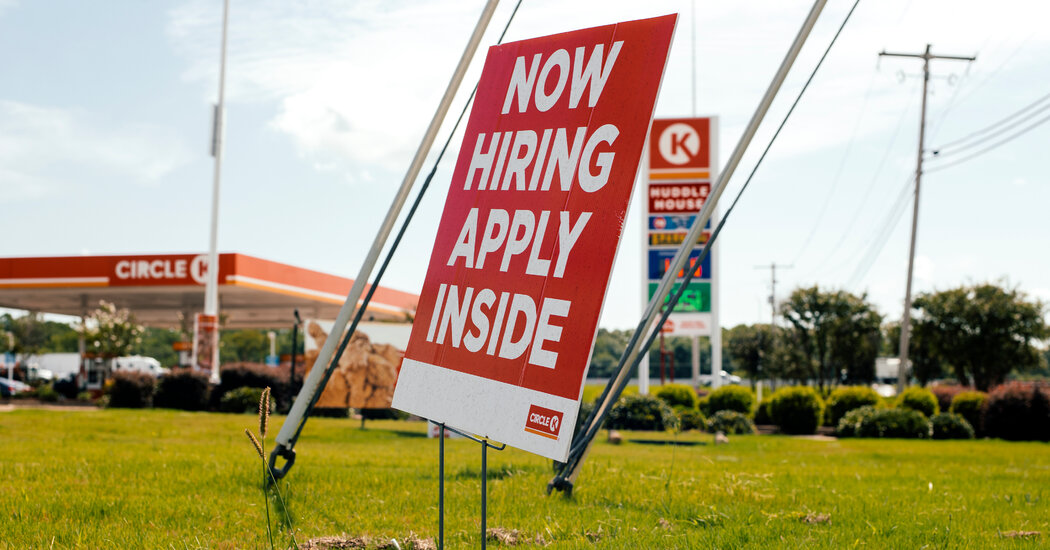 The number of Americans filing for unemployment benefits fell last week, but employers continue to lay off workers at an extraordinarily high pace that exceeds the worst levels of past recessions.

Initial claims for state benefits totaled 790,000 before adjustments for seasonal factors, the Labor Department reported Thursday. The tally, down from 866,000 the previous week, is roughly four times what it was before the coronavirus pandemic shut down many businesses in March.

The latest data suggests that jobless claims have flattened since the big gains in hiring recorded last spring as the economy bounced back, economists said. And layoffs continue — on Wednesday, for example, Raytheon said it would eliminate 15,000 commercial aerospace and corporate jobs.

“I’m concerned about a plateau,” said Gregory Daco, chief U.S. economist at Oxford Economics. “It suggests we are entering the second phase of the recovery, one that is slower and more susceptible to downside risk.”

Other economic data has been mixed. The Commerce Department reported Wednesday that retail sales rose 0.6 percent in August, compared with a 0.9 percent gain in July, as consumers grew more cautious.

And in a sign of how guarded the long-term economic view remains, the Federal Reserve indicated that it would keep interest rates near zero at least through 2023.

“The labor market continues to heal from the viral recession, but unemployment remains extremely elevated and will remain a problem for at least a couple of years,” said Gus Faucher, chief economist at PNC Financial Services.

Federal data suggests that the program now has more beneficiaries than regular unemployment insurance. But there is evidence that both overcounting and fraud may have contributed to a jump in claims.

The largest surge by far last week was in Arizona, where the Labor Department reported more than 165,000 initial claims under the program, an increase from 101,000 the week before. Both weeks, only California — which has also reported widespread fraud — had a higher tally.

“We are reviewing over one million P.U.A. claims for likely fraudulent activity,” Brett Bezio, deputy press secretary of the Arizona Department of Economic Security, said in an email. To give a sense of the scale of the attempted abuse, he pointed out that the state had received nearly 2.7 million jobless claims during the pandemic, which represents 80 percent of Arizona’s work force.

While Pandemic Unemployment Assistance has been hit with allegations of fraud, another new program, Lost Wages Assistance, has struggled to pay any money at all.

President Trump created it last month with federal disaster funds after Republicans and Democrats in Congress deadlocked on a relief bill. The payments of $300 per week — half the amount of a federal supplement that expired at the end of July — are retroactive to the week that ended Aug. 1. But officials said there was money for no more than six weeks, so states have been told that the coverage ended Sept. 5.

“Every state seems to be doing it differently,” she added, with some paying a lump sum of $1,800 to cover six weeks after getting off to a late start.

As with the earlier supplement, overwhelmed computer systems have added to delays. Colorado was set to begin making payments this week, but its certification process briefly froze because of demand, news reports said.

As programs like Pandemic Unemployment Assistance and Lost Wages Assistance expire or run out of funds, job searches might be expected to increase. But they haven’t — a sign some unemployed workers are giving up on finding a new position for now.

Ms. Pollak said she was surprised because 36 percent of those surveyed in July by ZipRecruiter said they would spend more time searching for work if the $600 weekly supplement ended. Just over 40 percent said they would be willing to take a less appealing position.

Instead, people aren’t budging. “We see a level of stasis in the economy,” Ms. Pollak said. “The uncertainty causes people to sit and wait. The whole economy is in a bit of a freeze.”

In some cases, workers have dropped out of the labor market. Labor Department data showed that 125,000 women ages 25 to 54 left the work force in August.

“This is a situation where many people are choosing to delay re-entering the labor force or to withdraw,” Ms. Pollak said. “In some cases, it makes more sense for workers to wait for conditions to improve in their industry. It’s costly for people to switch.”

In the meantime, the delays and other logistical headaches in jobless programs are taking a toll on workers and their families.

Marcos Quintana, 29, was laid off in December from his job as a seasonal custodian at a school in Bakersfield, Calif. He expected to find new work quickly, but the pandemic hit, and many custodial jobs dried up.

Mr. Quintana lived with his girlfriend, who lost her job as a hairstylist in March when salons closed. She filed for unemployment benefits but never received them, so Mr. Quintana supported them, paying the $935 in rent and as much as $300 in utilities for their apartment. To avoid falling behind on his $357 car payment and $185 car insurance bill, he cut off cable television and borrowed from his father.

Then Mr. Quintana found that he was eligible for Lost Wages Assistance. He was certified to receive the payments on Sept. 15, but he’s not sure when they will arrive.

Regardless, the money will be too late to avoid upheaval in Mr. Quintana’s life. His relationship with his girlfriend soured as the financial stress mounted. And Mr. Quintana couldn’t afford their bills.

So last week the couple split up, and he moved in with his parents.

Even though it has been unpredictable, Lost Wages Assistance has been helpful for some workers as they navigate an unforgiving economic climate.

Mary Costanzo was laid off as a bookkeeper at an accounting firm on March 27. She filed for unemployment benefits and started receiving $451 a week after taxes in Massachusetts benefits, plus the $600 federal supplement.

When the federal supplement ended, she didn’t have enough to cover September’s $2,262 mortgage payment on their four-bedroom house in Burlington, northwest of Boston. Her husband pulled $6,000 out of his 401(k) savings to make the mortgage payment and to have money on hand for October and November in case Ms. Costanzo hasn’t found work by then.

This month, she stopped receiving the state benefits, too. The unemployment office told her that she needed to refile her claim. She did so, but no benefits have materialized.

Lost Wages Assistance produced a lump sum of $1,200 this week. Ms. Costanzo doesn’t know if she will receive any more from the program. She does know that if she doesn’t get a job soon, she and her husband will keep draining their retirement savings.

After months of fruitless searching, Ms. Costanzo had her first job interview this week. If she gets the job, she will start on Monday.

She will be relieved if she is hired, but she will also be concerned, because the job requires working in an office. She had wanted a job she could do remotely, because she fears bringing the coronavirus home to her sons, 27 and 31, who have cystic fibrosis and are prone to lung infections.

“At this point, I don’t have a choice,” she said. “I need to work to pay the mortgage.”